Photos from the „Indians“ cycle constitute a stop-motion film to be screened via slide projector. Fairy -tales to be watched from a slide projector were during Libera's childhood very popular and Libera himself, as a boy, was fascinated with this type of entertainment - he sewn costumes, directed and photographed his own “films” to be played on a side projector. 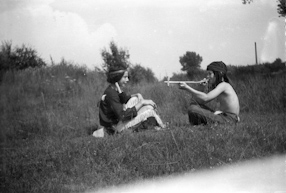