The idea of "Sociological Record" emerged during Rydet’s accidental visit to a car manufacturing plant in Jelcz. She was fascinated by the view of identical, small working spaces that the employees decorated with such items as cut-outs from newspapers, photographs of their families, religious images, erotic posters and landscapes. Convinced that objects and images gathered in private spaces defined people and “revealed their psychology,” Rydet decided to pursue the mission of documenting the interiors of Polish houses. The artist was interested in the ties that connected people with objects and architecture, as well as the way individual aesthetic preferences, political and religious views manifested themselves through the arrangement of private space. “The house ... is a reflection of the society, civilisation, and culture, from which it originates, there are no two similar people or two similar houses,” Rydet used to say.

"Sociological Record" abounds in contradictions – rather than a cycle of research or inventory photography (as the title, originally provided by Urszula Czartoryska suggests), it is a total project that sits within the tradition of intuitive artistic atlases and catalogues. Hence the title of the exhibition, which omits the “sociological” aspect of the series: record is regarded as a method that escapes the rules of a scholarly inventory. Writer and curator Wojciech Nowicki wrote in his book "Dno oka. Eseje o fotografii" [Bottom of the Eye. Essays on Photography]: “Record develops simultaneously in all directions, it carries on devouring new territories, it has tentacles that reach to all sides at the same time.” Aware of the impossibility of completing her work and documenting all Polish houses (in the 1980s, "Sociological Record" was expanded to include photographs taken in Lithuania, France, Germany and the United States, where the artist concentrated mainly on the apartments of Polish emigrants), Rydet engaged with her work with growing zeal and impatience; often, she seldom returned to the previously gathered negatives. She also started to visit the same houses after several years or more than a decade after her original visit, in an attempt to document the transformation of the rural areas of Poland.

At the same time, "Sociological Record" broke into numerous sub-categories that escaped the principles of the project. Some of these categories evolved into separate cycles, e.g. "The Myth of Photography" (Mit fotografii), "Women on Doorsteps" (Kobiety na progach), "The Ill" (Chorzy), "Presence" (Obecność); "Windows" (Okna), and "Disappearing Professions" (Ginące zawody). Travelling and working on "Sociological Record" inspired Rydet to discover new potential avenues for her project – for instance, the artist photographed bus interiors: always from the second seat behind the driver, with the vehicle interior reflected in a mirror. Many photographs from the analogue archive of "Sociological Record" result from Rydet’s obsessive desire to catalogue various objects or events (for instance, TV sets, kitchen tapestries, ceremonies, carts, traditional wedding portraits based on a hand-coloured photographs, gravestones), or escape the logic of the series altogether (various kinds of curiosities, sketches for never-accomplished conceptual cycles, or visually attractive photographic “mistakes” made upon photographing mirrors, for instance).

What is more, an analysis of unpublished photographs reveals that the artist staged the vast majority of the works – Rydet re-arranged photos on the walls, and assembled objects on tables into compositions. Thus, she created specific kinds of installations or assemblages that comprised elements found in the homes of people she did not know.

The cycle "Sociological Record" has been exhibited on many occasions (also outside of Poland, at the International Center of Photography in New York, among other venues), but on a limited scale: the displays usually featured several dozen photographs and are concentrated on the “canonical” images of villagers posing in the interiors of their houses. Rydet’s series appeared at a specific moment in the theoretical reflection on Polish photography – a time when the “possibility of sociological photography” was being debated (a discussion that culminated with the First Polish Sociological Photography Review in Bielsko-Biała in 1980). Towards the end of the 1970s, the People’s Publishing Cooperative intended to publish "Sociological Record" as a book. Yet, the idea was abandoned possibly due to the unfavourable – the extremely poor and backward – image of Poland that the series revealed. The documented destitution was also the reason why the album "Countryside" (Wieś) never saw the light of day, and the layout of "Little Man" (Mały człowiek) from 1965 was altered. In this context, "Sociological Record" was often interpreted as a political accusation; in the 1980s, fragments of the series were exhibited in the environment of church exhibitions opposed to the communist regime.

During the final years of her life, Rydet was already too weak to travel around Poland with her camera. That was the reason why she started to modify her photographic material with scissors, using pieces of fabrics, dried flowers and buttons. Her collages from the 1990s mark a return to surreal portraits and psychedelic imagery from the early period of her practice, a tendency that replaced the obsessive quasi-documentary and never-completed programme of "Sociological Record".

Always on the road and with the camera in her hand (the artist confided to Anna Beata Bohdziewicz in an interview: “I keep getting new ideas, I need to take photos immediately, it’s like an addiction, like vodka for an alcoholic”), Rydet never made prints from most of the negatives that "Sociological Record" comprises. As a result, only a modest portion of her work is known today, while some photographs have been repeated many times at different shows, and in different formats.

”Zofia Rydet: Record 1978–1990” at the Museum of Modern Art in Warsaw attempts to reconstruct an exhibition that never came into being – on the one hand, it relies on guidelines from Rydet’s notes and private written correspondence, while on the other hand, it adds a contemporary dimension to her work through the use of currently available technologies (especially in the case of prints that have never been produced before). The artist’s postulates included: the presentation of the photographs in different formats, the display of the manifold sub-categories of the project, and the experimentation with frames, prints and collections of slides. Rydet wrote in one of her exhibition outlines (ca. 1980): “The main element will be photos from residential interiors with their owners. There are a lot of them ... to avoid boredom they will need to be shown in different formats and various arrangements, ... e.g. couples, women, children, the ill, or matched by the similarities in interior decoration, e.g. old interiors with stoves or characteristic images and kitchen tapestries.”

The exhibition Zofia Rydet. Record, 1978–1990 recapitulates a three-year research project focussed on the archive of Zofia Rydet’s Sociological Record and operated by four institutions: the Foundation for Visual Arts, the Museum of Modern Art in Warsaw, the Zofia Rydet Foundation, and the Museum in Gliwice. The cumulative effort of the four partners has created the possibility to digitise Sociological Record and to make the cycle available to the public almost in its entirety, complete with numerous source materials, within the online archive www.zofiarydet.com. The year 2016 will feature an international academic conference and two books related to Sociological Record (Museum of Modern Art in Warsaw/Chicago University Press and the Museum in Gliwice) published. 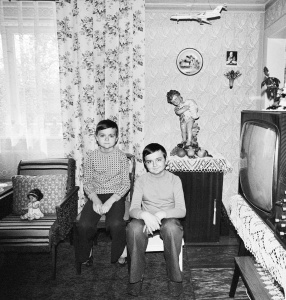