MIRIAM CAHN
I AS HUMAN

“MIRIAM CAHN: I AS HUMAN” is the first Polish retrospective of the Swiss artist Miriam Cahn, one of the most important and acknowledged painters of the second half of the 20th and the beginning of the 21st century.

For over four decades the artist has been bearing witness to social conflicts, crises and emergencies, contemplating the contemporary human condition and the agency of painting vis-à-vis such subjects as war and violence, sexuality, nature, family relationships, and death. Cahn’s rich oeuvre, which includes not only painting, but also drawing, performance, text, and film is based on uncompromising resistance to all forms of violence and therefore is very relevant today.

Simultaneously, she was developing her uncompromising language of artistic expression that has been always grounded in the body: the body as the artistic tool and as the object of visual representation. After graduating from the Department of Graphic Design at the Allgemeine Gewerbeschule in Basel, Cahn focused primarily on black-and-white works on paper, produced by using her entire body. She rejected the hierarchy which posits drawing as a sketch and a medium inferior to painting, moving drawing in the direction of performance. This gesture became the starting point for her later large-format drawings in coal, which the artist created on the floor, open to process and experiment. Registering the media coverage of social and political events such as the Persian War, the conflict in former Yugoslavia, or the attack on the World Trade Center, Cahn responded with, among others, the iconic representations of war ships, sites of deportation, weapons of mass destruction, and other symbols of power, control, and violence.

Cahn’s participation in three international art events may be considered central to her development as an artist: documenta 7 in 1982 (from which Cahn withdrew her work in the act of protest); her solo exhibition, curated by Jean-Christophe Ammann in 1983 in Kunsthalle Basel, where for the first time, looking at her own family relationships, Cahn reflected on the division of the world into the male and the female; and the 41st Venice Biennale, where she represented Switzerland in 1984. But the real breakthrough in her art happened in mid-1980s when Cahn introduced color into her works on paper, and a few years later, when at 45 she turned to evocative and intuitive painting. Her participation in documenta 14 in 2017 brought her international fame and confirmed her position as an artist who represents one of the most distinct ways of being actively engaged in contemporary world and its problems.

Cahn’s works on canvas are above all an attempt to translate emotions into the language of painting: emotions that cannot be conveyed in verbal language in the face of trauma, acts of violence, armed conflicts, racism, and toxic human relationships. Figures in her paintings are often represented without facial features and clothing, as if the artist wanted to lend them the most universal, primal significance, reducing the body to vulnerable bare life. She is also testing the possibilities of representation in painting and striving to face the key questions related to the agency and ethics of art. How does one represent suffering and injustice without telling a moralizing tale? How does one avoid the trap of pathos and sensationalist spectacle? How does one assume the right to speak in the name of those who were deprived of a voice? And finally, how does one represent relationships that extend beyond the human, to the world of nature and non-human species?

The project was financed with the support of funding from Pro Helvetia.

(born in 1949 in Basel) Swiss painter, graphic artist, and writer. She studied graphic art with Armin Hofmann in the famous Allgemeine Gewerbeschule in Basel. In the 1970s she associated with the Swiss Stampa gallery which gathered a young international community of artists experimenting with the new media, such as video and performance. From the very beginning she combined her life as an artist with political activism. In 1977 she visited Warsaw for the first time, as an OFRA delegate (the Swiss Organization for Women) at the World Congregation of the Builders of Peace. In 1982 she withdrew her works from the prestigious documenta 7 show, curated by Rudi Fuchs. A year later she had her first institutional solo show in Kunsthalle Basel, at the invitation of its then director Jean-Christophe Ammann. In 1984 she represented Switzerland at the 41st Venice Biennale. In 1995 she has shown her works in Poland for the first time at “Where Is Abel, Your Brother” show, curated by Anda Rottenberg in the Zachęta Gallery in Warsaw. She gained international recognition with her show at documenta 14, curated by Adam Szymczyk. “MIRIAM CAHN: I, AS HUMAN” in the Museum of Modern Art in Warsaw was preceded by the artist’s shows in 2019 in Kunstmuseum in Bern and in Haus der Kunst in Munich. Cahn’s works can be found in numerous art collections around the world, among others at MoMA in New York, at the Tate Modern in London, at the Reina Sofía Museum in Madrid, as well as at the Museum of Modern Art in Warsaw. Miriam Cahn is the recipient of many awards, such as the Käthe Kollwitz award (1998), the Meret Oppenheim award (2005), and the award of the city of Basel, Basler Kunstpreis (2013). 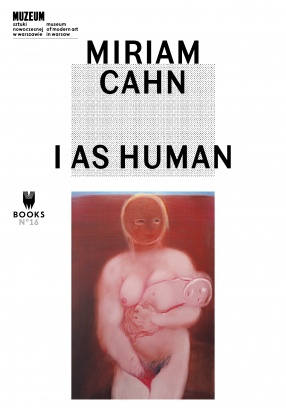