Art, Incidentally
As a part of 6th WARSAW UNDER CONSTRUCTION Festival

Sometimes works of art emerge spontaneously, on the spur of the moment. That is the case of the mural created by Marian Bogusz in 1958, during one of the friendly get-togethers in the studio of the photographer Jan Styczyński in the Warsaw’s district of Żoliborz.

The mural constitutes a starting point for the double narration describing the intertwinement of art and life, the tension between what is private and intimate, and what is public and official; what is accidental, created on an impulse, and what is consistent and all-encompassing. That metaphorical reunion of characters with extremely different life stories and attitudes is knitted together with the thread of creative cooperation.

In 1958 Marian Bogusz was one of the key actors on the Warsaw art scene. Two years earlier he had opened the Krzywe Koło Gallery in the Old Town Community Centre (Staromiejski Dom Kultury), which in various periods was known under various names, even as the Gallery of Modern Art, yet always referring to “Krzywe Koło” or the community centre. The exhibition space of the club comprising the intellectual elite of the Polish October living in Warsaw constituted one of the most important venues on the cultural map of the capital. It united the art community in the city and exhibited the works of the most important contemporary Polish artists, from Magdalena Abakanowicz and Włodzimierz Borowski, to Henryk Stażewski and Alina Szapocznikow, to Jerzy Tchórzewski and Barbara Zbrożyna. Art shows were accompanied by poetry readings and concerts of experimental music from composers nowadays considered to be classics: Włodzimierz Kotoński, Krzysztof Penderecki, Kazimierz Serocki.

The formula and activities of the club and the Krzywe Koło Gallery resembled the Young Artists’ and Scientists’ Club established in 1947, in which Bogusz was a member of the painters’ division, alongside Zbigniew Dłubak, Stanisław Fijałkowski and the deans of the pre-war avant-garde: Henryk Stażewski, Maria-Ewa Łunkiewicz-Rogoyska, Władysław Strzemiński and Marek Włodarski. In both cases the avant-garde model for integrating artists from different fields was based on the Polish Arts Club active in the years 1916-1931 in the Polonia Hotel in Warsaw.

At that point Jan Styczyński had already published his first titles, translated into foreign languages and therefore considered to be “export goods”, and had had his first solo exhibition in Kordegarda (1957). For a year he has been enjoying his new studio and a townhouse apartment in the Żoliborz district, allotted to him by the housing cooperative. He was working there until 1961, when he moved with his entire family to the Mokotów district. The studio in Żoliborz is where – with his wife’s help – he was taking animal portraits and occasionally advertising photos. Earlier, in the period dominated by the social realism, like Marian Bogusz he had found employment in the exhibition business: he developed scripts for exhibitions of the Społem cooperative reactivated after the war. As an ex-Home Army soldier he had to find shelter far from the main stream of events. Genre photography, outwardly neutral in terms of ideology, seemed to be the perfect solution.

Unlike Styczyński, who preferred to work quietly, Bogusz was an artist to the bone – his main field was painting, but he also created scenography, exhibition and interior arrangements, graphic design, and later on sculptures and spatial forms in the public space. At the same time he was one of the most active postwar animators of the Polish art scene, who strengthened the avant-garde community, provoking theoretical debates, founding new initiatives and artistic events.

After the forced closure of the Krzywe Koło Gallery in 1965, Bogusz took upon himself to organise efforts aiming at bringing art and everyday life closer together, opening the space beyond the gallery and becoming open to a direct relationship with the environment.

Between 1965 and 1978 he contributed to organising open air painting sessions, symposiums and a spatial forms biennale. He was striving to promote art and aesthetical education. In order to directly shape tastes and develop artistic sensibilities of the general public, he organised, among others, so-called artistic Mondays – exhibitions and talks in workplaces, workers’ hostels and community centres in remote places. But, of course, these activities would not have been possible without the cooperation of other artists and communities. Most remarkable names among his collaborators include Emanuel Munios with whom Bogusz was developing the concept of “the city of artists” while they were being held in a concentration camp; Zbigniew Dłubak and the remaining members of the Group 55; Jerzy Fedorowicz with whom he worked on the organisation of the open air sessions in Osieki (from 1963); Gerard Kwiatkowski, the co-organiser of the Biennale of Spatial Forms in Elbląg (from 1965) and Jerzy Olkiewicz, the co-author of the idea for a route from the National Museum to the Zegrze Reservoir.

Bogusz and Styczyński were usually meeting in informal settings, as they became acquainted during frequent gatherings in Styczyński’s studio, where strong liquor was not uncommon. It is also where they met Jan Lebenstein, working from an adjacent studio. In such casual circumstances, in 1958, two artistic events took place: the creation of the mural by Bogusz and the birth of a painted ceramics collection. Without the proper presentation of the broader context of their realisation, these facts could be considered mere anecdotes.

But in both cases we can refer to the modernist awe for the functional art, or the willingness to entwine visual arts with architecture and everyday life, which are all very particular phenomena for the period of the Polish thaw. In the West we can see the same tendency displayed in Le Corbusier’s fabrics or Picasso’s ceramics. The latter, during his stay in Poland in 1948 on the occasion of the World Congress of Intellectuals in Defence of Peace in Wrocław, presented to the National Museum in Warsaw a collection of 32 ceramic plates of his own making.

After several years of the predominance of social realism (1949-1953/4), which constitute a break in the “natural” development of art, artists readily took up ceramics (dubbed pikasy, after Picasso and his plates), thus building in the late 1950s a new, more liberated aesthetics of modernity. Their gaze still fixed on Paris, they drank in and implanted on home ground their own, processed version of Picasso’s linearism with its classicist tendencies, informel painting and surrealism. Bogusz became infected with the Picasso and Leger virus as well.

In the initial design for the decoration of Manekin cafe walls in the basement of the Old Town community centre, where Krzywe Koło Gallery was situated, Bogusz and Kajetan Sosnowski made imitations of French compositions only to paint over them and transform them later on in the process of mad painting improvisation. The mural in Styczyński’s atelier was created in the same year as the Manekin decoration and it constitutes a typical example of Bogusz’s painting from this period, inspired by art informel.

Years later, Styczyński admitted that he had been inspired by Picasso’s plates in the National Museum. But according to his daughter Anna Sfarti, who participated in the spontaneous painting of the mural, when the first of Styczyński’s plates was being painted by Jan Lebenstein, the artists debated the possibility of painting a round picture, as opposed to the traditional, rectangular shape. After all, Styczyński was interested in the picture as such, not in creating a popular decorative item. This story echoes modernist debates on the nature of the painting. It brings to mind Clement Greenberg’s postulate concerning abstract expressionism (which is an American version of art informel) about the paining as an autonomous, paint-covered surface, limited by a rectangular frame.
According to the artist’s daughter, plates decorated by famous artists were not so much a gift, as a barter item. Styczyński received them in return for colour reproductions of his works created for all kinds of publications.
Plates were created spontaneously and rather irregularly from the beginning of the 1950s. In the early 70s Styczyński began preparing another type of “export goods” – a photo album devoted to the work of outstanding artists. The book entitled "The Artist and His Work" was published in 1976 in Polish and in the following years also in English and German. It featured portraits and colour reproductions of works by painters, sculptors, architects, composers, musicians, as well as film and theatre directors. While working with the artists, Styczyński expanded his collection of plates, this time in a systematic fashion.

At first, random items, like decorative bowls from Cepelia, served as canvas for the artwork. Later on, after compiling a list of artists he wanted to involve in the project (which was supposedly consulted with Ryszard Stanisławski, director of the Museum of Art in Łódź) Styczyński purchased a number of even bisque pieces – unglazed pottery – which he gave out to artists, asking them to paint a composition. This unique collection, comprising several dozen pieces created by outstanding artists spanning many generations (Henryk Stażewski, Tadeusz Kantor, Jerzy Nowosielski, Zbigniew Gostomski, Ryszard Winiarski, Teresa Pągowska, Tadeusz Kulisiewicz, Jan Dobkowski and Marian Bogusz), was exhibited only once before, in 1978, in the Kordegarda Gallery. 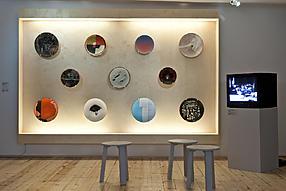 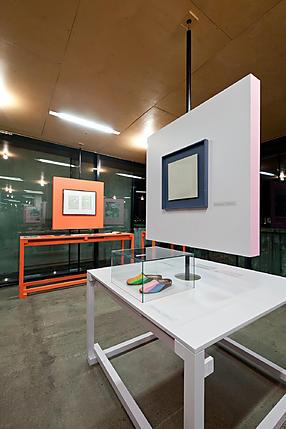 Exhibition as a part of WARSAW UNDER CONSTRUCTION festival SUN, Oct 12, 2014