"TypoPolo” is a notion which describes an aesthetic phenomenon, namely, the amateur designs of advertisements, signboards or informative inscriptions made for small businesses and crafts, which came into being in the Polish public sphere of the 1990s.

The style constitutes a visual reflection of economic and political transformations in Poland and a symbol of the romantic turning point, in which “everyone could be who they wanted to be and where everything was possible”. “TypoPolo” is perceived in the circles of professional graphic artists mainly as a sign of the ineptitude and bad taste of amateur designers. Much less frequently it is seen as a form of the visual language of a certain social group or the evidence of the changing aesthetics. It combines what is worst and what is best in Polish applied graphics – being the manifestation of kitsch, amateurishness and crudeness on the one hand and incorporating authenticity, guilelessness and straightforwardness on the other.

Today, due to the professionalization of the market of printing and advertising services and the changed aesthetic standards, the style of "TypoPolo" is quickly disappearing. And although the professional ”Helvetica” dominated the signboards and inscriptions in Polish cities, “TypoPolo” cannot be erased. It will remain forever a non-recognized and embarrassing part of the Polish visual identity.

This crowding out makes us face numerous important questions connected with designing and visual culture: about the carelessly lost post-war lettering tradition, about the long-forgotten ethos of a craftsman – designer, about the factual usefulness of designers to the local community and about whose visual language and aesthetic taste rules in the public sphere.

The “TypoPolo” exhibition constitutes an attempt to grasp and describe visual actions connected with vernacular graphics, accidental typography and bottom-up designing. The exposition consists of examples: of signboards, lettering and inscriptions displayed in shop windows in the form of original objects and photographic documentation. Part two is made up of typographic and graphic designs realized by professional designers who seek inspiration in the “TypoPolo”. The exposition is concluded by a set of undertakings examining the issue of visual identity and designing for local businesses and crafts.

The accompanying programme of the exhibition will include a one-day symposium, held on May 24th at the Museum of Modern Art in Warsaw, devoted to vernacular typography, attended, among others, by: Marian Misiak, Hokobo, members of the Stowarzyszenie Miastodwa association and the Dizajn-BWA gallery. 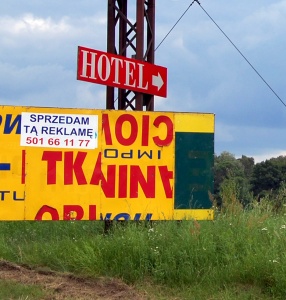 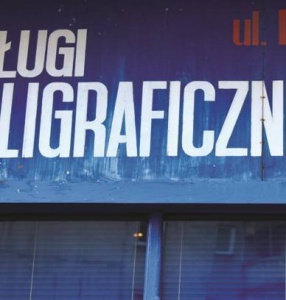