The exhibition "Polish-Indian Shop" focuses on the now forgotten but once very close relationship between the Polish People’s Republic and the Republic of India. This affiliation allowed Poles to take active part in the socialist modernization of India and to be under the influence of the Asian culture. At the same time, networks of unofficial trade and smuggling developed.

The history of the “Eastern window on the world” shows that the structure of geographical interconnections, which affected the Polish transformation after 1989 is much more complicated than the simple division into the two sides of the Iron Curtain.

The presentation includes a variety of audio-visual culture archives, both official and completely private ones; great political narration is juxtaposed with memories of bazaar merchants, archives – with contemporary recordings.

"Polish-Indian Shop" summarizes research conducted by an artist Janek Simon and a journalist and writer Max Cegielski. Since the late 1990s, they have travelled to India where they came across records of the historical trade exchange between Poland and the subcontinent. Frequently asked why they didn’t brought crystals, hair dryers or Zenit cameras for sale, they – years later – decided to grasp the phenomenon of the Polish bond with this seemingly exotic culture. Before starting cooperation on the project, they were both interested, among other topics, in the world’s largest graveyard of ships – in the town of Alang in the state of Gujarat. Simon tackled this subject in his work Alang transfer bringing from India a collection of images and information boards belonging to various floating units, while Cegielski employed it in the project Global Prosperity in which – together with a photographer Michał Szlaga – he searched the place for traces of ships built for India in the Vladimir Lenin Shipyard in Gdańsk. Both authors – Simon in visual arts, Cegielski in books (beginning with his debut: Masala) – analyzed the historical and contemporary circulation of objects and ideas between the Western peripheries and the East.

The narration of "Polish India Shop" starts with reconstruction of a commemorative album prepared by the Polish authorities as a souvenir for the first Prime Minister of independent India, Jawaharlal Nehru, after his 1955 visit in Warsaw, Cracow and Silesia where he was greeted in the streets by crowds of people, often simply curious about the exotic guest, whereas he was interested in Polish mines and factories as an example to follow by the “greatest democracy in the world”. Black-and-white photographs define the type of relations the two countries maintained for many years: it’s a story of the cooperation between socialist Poland and India – officially, the country not involved on either of the sides of the Iron Curtain, though leaning towards the slogans of the Soviet Bloc. In 1957, Prime Minister Józef Cyrankiewicz visited Delhi – the exhibition presents his caricaturized image taken from the satirical magazine “Szpilki”, sitting on an elephant. Politics forced the Prime Minister, then other socialist officials, to adapt to the local customs, which meant departure from the rigid norms of “Marxism-Leninism”.

The same applied to the works of Polish economists Oskar Lange and Michał Kalecki. The Polish School of Development they created is still considered as pioneer in the field of the post-colonial studies. Polish specialists working in Asia or Africa were allowed to stop following the principles of the Marxist economy – development plans they were preparing were based on analyses of the local socio-economic conditions and postulated introduction of “mixed economy” combining socialism and capitalism. Polish engineers, therefore, built sugar factories, power plants or new mines on the subcontinent – shown on exhibition thanks to the archival programs of the Polish Television. The top achievement of the lofty narrative about modernizing “the Third World” became the Polish Embassy erected in Delhi on the basis of the modernist project by Witold Cęckiewicz, opened in 1978. The building was even said to make the ambassador of the USSR envious having turned into a spectacular symbol of “socialist modernity”. Simultaneously, unofficial cultural impact was getting stronger. Branches of the Indo-Polish Friendship Association – in Warsaw and in smaller towns – became havens of hippies and people associated with the New Age movements, attracting attention of the Secret Service. Yoga and the Hare Krishna movement were gaining popularity; the Eastern forms of spiritual practices competed with the socialist and catholic lifestyles. At the same time, Polish mountaineers tested various smuggling methods in order to finance their extraordinary successes. Soon, others followed them. In the 1980s, enormous amounts of goods were transported to India for sale (thanks to regular flights of the Polish Airlines – LOT). The earnings served to buy fabrics, which initiated wholesale trade even before 1989. The boldest newcomers from Eastern Europe concentrated on extremely lucrative gold smuggling from Singapore to India. “Hard currency” obtained from gold and fabrics and invested in the era of “free trade”, became an element of the fledgling liberal economy in free Poland, after 1989. One of its symbols was “India shops” the remnants of which complete the chronology of the exhibition’s narrative.

This late stage of the unofficial trade appears at the exhibit in the form of the neon from the Prince Polonia hotel located in the Paharganj district in Delhi where beginning Polish capitalists used to stay. Such objects, brought from India particularly for the exhibition purposes, next to other artifacts of everyday visual culture (magazines, ads, TV programs) are one of the exposition’s layers. Another is constituted by contemporary interviews with gold smugglers, former hippies engaged with the Indo-Polish Friendship Association or, eventually, Indian merchants, still speaking polish. Personal narratives are confronted with official archives and artworks inspired by the East (Tadeusz Kulisiewicz, Erwin Sówka, Egon Fietke).

In 2017, when the very idea of globalization experiences a crisis related with the fear of other cultures, especially in the context of Poland separating itself from “foreign” influences, intercontinental relations initiated in the times of the Cold War seem a necessary inspiration. They also make us verify the image of the country before the changes introduced by the Round Table and in the beginning of the 1990s’ transformation. These changes were stimulated not only by Western culture and politics officially referred to by the Polish authorities after 1989; the East was also the space for searching and testing new life patterns – later the Eastern experience has practically been superseded from the official narratives. The common tendency to forget or not to mention the long-time Indo-Polish relations is an element of the everlasting problem of mentally turning our back on Asia and trying in vain to build our identity on the Western norms only. In the era of yet another attempt to reevaluate the Polish identity and geopolitical position, the exhibition Polish-Indian Shop reminds us of its several variants functioning in the past.

The first stages of the project research have already been presented at the Biennale in Pune and in the Vadehra Gallery in Delhi, while in November 2017 the entire exposition will be moved to the Clark House Initiative in Mumbai.

Partners of the exhibition and the opening 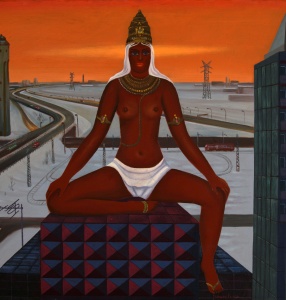 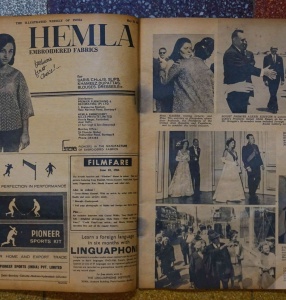 Art & its Materiality with Trade