„I’m just providing the possibility, the condition for things to happen” - Ryan Gander

Ryan Gander's work "Really Shiny Things That Don’t Mean Anything" is a 3-metre metal sphere covered with a thousand shiny, metal items. The sphere gives the impression that it has just rolled through the city and collected small objects on its surface, the function or form of which is unclear. Frozen on a plinth in the middle of the city, the sphere gleams in the sun and resonates light onto the surrounding area, prompting the curiosity of local inhabitants and drawing intrigued glances as if by magnetic power. The artist declares that the work "does not mean anything", since meaning can not be imposed, it can only be produced through a long process of negotiation, similar to how social space is produced, as explained to us by the French philosopher Henri Lefebvre.

According to Lefebvre, social space is a constructed space, consisting of a net of community relationships, which overlap one another and the space, like a dense cobweb. Creating a community and creating a space for the community cannot be separated, the philosopher seems to be saying, proving that the process of constructing public space is both a social and a political act. Every community produces its own space, from which the meanings that describe it can be read. So what is the space of Plac Defilad and what does it say about us, the inhabitants of Warsaw?

This is what Gander's work seems to be commenting on. Similar to his earlier projects, Gander returns to the subject of urban architecture, to comment on it in his own, perverse way. In The Boy Who Always Looked Up (2003) he did it using the medium of a children's book. In the 48-page book written by Gander and illustrated by Sara De Bondt, Gander describes the life of the Hungarian architect Erno Goldfinger, the constructor of one of the most iconic high-rises in London, Trellick Tower. Built in 1972 in the spirit of modernism, the high-rise was supposed to become a symbol of comfort and a better future. The reality was otherwise. Like many other similar projects, Trellick Tower quickly became a place inhabited by the poor, with common social integration problems, rising unemployment and crime. In Gander's story a boy called Tom, the novel's narrator, from a street adjacent to Trellick Tower, meets an architect and befriends him. In conversation the boy explains how he always looks up, as from this perspective everything seems possible - a statement that ironically contrasts the utopian intentions of the architect with brutal reality. Confronting the characters of the boy and the architect, Gander seems to be questioning whether architecture really can induce social change and whether the modernist dream is merely a naive fantasy.

Similarly, in The Happy Prince piece commissioned in 2010 by Public Art Fund from New York, Gander proposes not quite a public sculpture, but the ruins of one. As in the case of  "Really Shiny Things That Don’t Mean Anything" , the work takes its beginning in a story, this time in one of the best known children's stories in Great Britain: The Happy Prince by Oscar Wilde. In the story, a statue of a happy prince placed on the main city square was decorated with gold and jewellery. One day the prince makes friends with a swallow and asks her to distribute the jewellery amongst the poorest people in the city. The upset councillors, after having seen the bare statue, order for it to be destroyed, as it is no longer able to represent the city in a dignified way.

Ryan Gander came up with his own ending of Wilde's story. In his story the ruins of a destroyed statue still represent a city, this time contemporary New York, forcing us to ask a question about the meaning and function of urban sculptures and monuments as well as the symbolic potential they carry. What will it be like in the case of Plac Defilad? Can Gander's sculpture change it and determine the standards of public space? Most likely not straight away and not forever, however it can prompt a discussion, just like it happened in New York, about the functions of the square and provoke new steps towards changing of the space in an explicit and permanent way. Then, the shiny items that do not mean anything, will acquire meaning, creating conditions for change to happen.

Ryan Gander is a conceptual artist whose practice manifests itself in a variety of forms and media, such as a children's book, a story, typography or lecture-performance. He was born in 1976 in Chester, Great Britain. He graduated from Manchester Metropolitan University (1999), the prestigious Jan van Eyck Akademie, Maastricht (2000) and Rijksakademie van Beeldende Kunsten in Amsterdam (2002).

His works often refer to 'urban' subjects situated between design and architecture creating humorous, often tautological comments on their role in the creation of urban space. Commissioned by Public Art Found, Gander made his first public sculpture in 2010 in Central Park, New York. The work, titled The Happy Prince was deemed one of the most important public art projects in recent years. 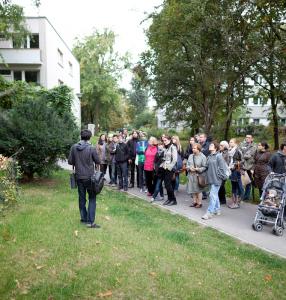 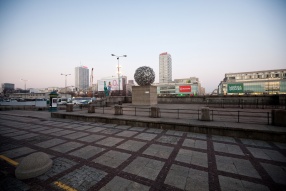