Joanna Rajkowska's "Greetings from Jerusalem Avenue", a palm tree standing on the Charles de Gaulle roundabout in the heart of Warsaw, is the most iconic Polish artistic project in public space since 1989.

The palm tree became one of the new symbols of Warsaw, both exotic and familiar, provoking and energizing. It is an anchor point for protests, manifestations and happenings. The palm tree is both a Varsovian and a foreigner.

The palm tree is a reminder of the Jewish community that inhabited Warsaw until the Holocaust, implicit in the name of Jerusalem Avenue. Yet, as well as signalling this loss, the palm tree also stands as a symbol of the new urban reality. It is a homage to the chaotic, busy, Central European metropolis, and a tribute to diversity and flux, migration and change. As the climate crisis deepens, this exotic tree draws our attention to increasingly dangerous changes and so becomes a warning, right in the centre of Warsaw.

The palm tree is absurd and whimsical. It helps us to maintain a distance at times of excessive pomposity, it deconstructs societal rituals and allows us to look at Jerusalem Avenue as a huge stage set for the spectacle of the unfolding 24/7 city.

The palm tree appeared on the roundabout in the centre of Warsaw thanks to the enthusiasm and labours of many people: activists, volunteers, artists, institutions and companies. It was constructed and installed under the patronage of the Centre for Contemporary Art Ujazdowski Castle in Warsaw. As of 2014, Greetings from Jerusalem Avenue is part of the collection of the Museum of Modern Art in Warsaw.

(b.1968, Bydgoszcz) is a visual artist dealing with public projects, objects, films, installations and ephemeral actions in urban space. 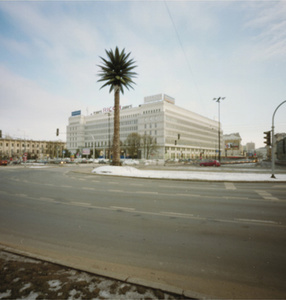