Both the exhibition "Awkward Objects: Alina Szapocznikow and Maria Bartuszova, Pauline Boty, Louise Bourgeois, Eva Hesse, and Paulina Ołowska" and the accompanying conference devoted to Szapocznikow and her work are a response to the clear change in the perception of this artist’s oeuvre, and to a general revision of the way the art of female artists of her generation is viewed.

This presentation of juxtaposed pieces by Bourgeois, Hesse, Boty, and Bartuszova is an attempt to show how these female artist-pioneers, as they experimented with material, with its form and expression, often including pre-feminist motifs, sought recognition, often in vain, from the artistic mainstream of their time. They now have become a major focal point of interest for new art history.

The point of a simultaneous presentation of artists who are but accidentally connected to each other is to draw attention to the insufficiency they all felt in the existing artistic vocabulary, as well as to the shared feeling of a need to foresee new worlds, to propose and push for the new. By presenting work from the 1960s and early ’70s, we focus in particular on the turning point when canonical artistic vocabularies underwent revaluation. The need for change had not yet been defined as either a demolition or re-construction of history, and the new was felt only intuitively. The exhibition is conceived to recall the inspiring intuitions, doubts, or illusions felt by those pioneers at a time when that history was just beginning to write itself. The artists’ work, as presented here, reveals that in treading unknown ground it is the body, with its direct and individual experience, which is of greatest importance. When creating new languages, one needs to focus on the fragment, on the ignored remnants, so as to extract a new totality from the immense domain of pre-existing knowledge.

Apart from the novel formal concepts it brings forth, what is particularly significant in Szapocznikow’s work is her innovative take on the body and its representation, touching on traumatic memories of the Holocaust, illness, and the finitude and feeble nature of the body. At the same time her art is a manifestation of extraordinary affirmation and admiration of life and the untamed power of female expression. For the first time since the artist’s death in 1973, her oeuvre is beginning to achieve international recognition and a place in great collections like the Centre Georges Pompidou in Paris, the Museum of Modern Art in New York, or the Tate Modern in London.

"Awkward Objects" puts on display those pieces which best relate to those themes taken up by Szapocznikow most intensively discussed at present, in particular her casts of the body and its parts or remnants. These are shown in relation to the artistic efforts of other female artists of her time. The fragmentation continuously observable in her work, beginning with early pieces like Noga [Leg], 1962, over time become a dominant motif, culminating in the series Fetysze, Desery, Lampy [Fetishes, Deserts, Lamps]. The fact that the artist herself thought of her work in terms of remnants is demonstrated in her 1971 arrangement entitled Stół Panny Młodej [Bride’s Table], a collection of smaller pieces that make up a single composition. There is also an exploration of the theme of the mechanization of the body, an example of which is the sculpture Goldfinger, 1965, comparing it to similar motifs present in drawings by Eva Hesse.

Another fact worth noting is the pioneering use of polyester resins for different types of body casts or prints. This creates very interesting links to bronze works from that time by Louise Bourgeois, who also experimented with the different possibilities offered by different materials, or to the subtle but very sensual plaster pieces by Maria Bartuszova. In Alina Szapocznikow’s oeuvre, body casts vary from monumental pieces like Duże Brzuchy [Big Bellies], 1968, shown here for the first time in Poland, through a series of lamp-breasts, to small casts of lips. The dynamic but mysterious erotic themes are another element shared by both Szapocznikow and Bourgeois.

A possibly new path in the interpretation of Alina Szapocznikow’s work leads along the artist’s references to popular culture (the James Bond movie Goldfinger, for example), her fascination with the phenomenon of multiples and gadgets, or the specific play on the motif of various Rolls-Royce models. Here Szapocznikow’s position is close to the pop-art images of Pauline Boty. We emphasize this innovative understanding of the work of art outside the object’ by showing ephemeral sculptures, like a work now available only in photographic form, Popielniczka Słomianego Wdowca [The Ashtray of a Grass Widower], 1972.

One important inspiration in preparing the exhibition was the work on Alina Szapocznikow’s archives on loan from the National Museum in Krakow. This invaluable source of information, private letters, photographs, and plans for projects never realized helped us go back, in the documentary portion of the exhibition, to ignored themes in the artist’s work, and to recall projects which were abandoned, impossible, or simply forgotten, such as Ślizgawka w Wulkanie [Sliding in a Volcano], 1972, or the monument in Milan, 1972. We also show numerous photographs of Szapocznikow at work in her studio along with similar representations of other artists included in the exhibition. We emphasize her very contemporary awareness of creating one’s own image, an idea underlying the idea of including works by Paulina Ołowska in the exhibition. Through paintings created over the years, as well as in collages prepared especially for this event, Ołowska analyses the question of the image of the artist as inspired by the phenomenon of Alina Szapocznikow.

The exhibition will be accompanied by "Alina Szapocznikow: Works, Documents, Interpretations", an international conference to be held on May 15-16, 2009, (read more) which will welcome an array of world-renowned art historians, curators, critics, and collectors, who will seek to reflect on and animate new tendencies in research on Alina Szapocznikow’s art. The exhibition has also served as an impulse for a documentary on Szapocznikow produced by the Polish public television channel TVP Kultura. 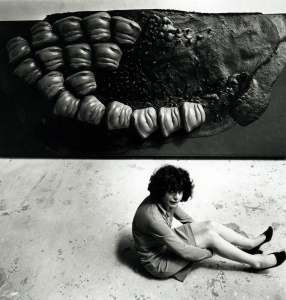 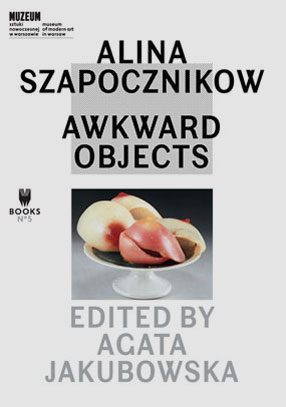 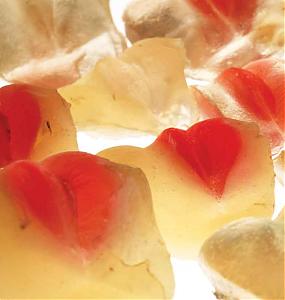