"I Could Live in Africa" takes you on a trip into the exotic, from today’s perspective, 1980s.

When, following a hot August (the Solidarity agreements, 1980), came the cold December of 1981, Apocalypse Now was to open in the cinemas, and tanks suddenly appeared in the streets. TV and radio kept broadcasting the worried Gen Jaruzelski announcing, through clenched teeth, the introduction of martial law. The borders were closed, a curfew was introduced. Shop shelves were empty, yet long queues formed outside. There were cuts in power and gas supply, petrol was rationed.

The adolescent generation faced the hopeless perspective of living in a frozen reality as the ineffective system fought to prolong its existence with tanks and the secret police. The central government controlled virtually all channels of production and distribution. The official cultural circuit had lost credibility, the unofficial second’ circuit was driven by the logic of political conflict. The opposition’s main ally became the Catholic Church. Cinemas, theatres, and galleries were closed. Young people could choose either a cynical career in the official structures, joining the underground opposition movement, or abnegation. They were surrounded, on the one hand, by the regime’s dull propaganda and, on the other, by Radio Free Europe, the underground press, street demonstrations, and church exhibitions. The atmosphere was extremely stuffy, young people felt suffocated.

An eruption of subcultures followed. A third circuit’ emerged – concert recordings circulated on bootleg tapes, fanzines sprouted up, subversive graffiti covered the walls, and young people demonstrated their attitude through extravagant dress and hairstyle. In art, there was a return to expression, to primitive forms and inspirations, to artists using pop-cultural junk and rubbish, and employing techniques like collage or stencil. Exhibition openings, organised in private apartments or claimed’ spaces, turned into improvised happenings complete with revelry and concerts. Handmade pamphlets and artzines (printed or copied outside the censors’ reach) abounded. Although the times were hardly funny, there was a lot of open mockery of the totalitarian regime, the propaganda, official culture, the mass media, the Catholic hierarchy, social obscurantism and hypocrisy. Concerts turned into ecstatic group rituals, serving as outlets for the pent-up energy.

The exhibition "I Could Live in Africa" takes its title from a documentary about the post punk/reggae band Izrael made by Jacques de Koning, a young Dutchman, who arrived in Poland near the end of martial law and, talking to the band’s members, tried to understand what was going on. The exhibition focuses on those forms of reaction to the 1980s reality that were based on an anarchic revolt against the jammed system, on searching for alternative social economies, on spontaneous, primitive means of communication, on self-organisation, DIY, recycling, copying, exchange. On uncompromising commitment and, at the same time, on keeping a distance. It is about the wild times when young people smoked grass and drifted away from Babylon – to warm countries. 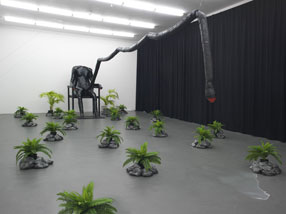