Museum of Modern Art in Warsaw invites visitors to the first Polish presentation of the Artists Books created by one of Croatia’s leading artists, Mladen Stilinović. The exhibition shows books from the years 1972-2010.

In his broad activity as an artist and with the use of a variety of media, Stilinović exposes and questions the ideological signs which have shaped modern society. In line with the thoughts drawn from the works of the Russian literary critic, Mikhail Bakhtin, the artist constantly endeavors to reveal that “language is an ideological sign par excellence.”

The interest in the book as an artistic medium results from Stilinović’s early experiences as a poet. It is with this medium that he entered the arena of visual arts, and for some time he wrote poetry. All of his later artistic works are marked by ironic humor and a characteristic melancholy, yet they invariably focus on the relations between language and art as well as ideology and art. The books are handmade by the artist in single copies, or in very limited editions. He uses simple materials such as photographs, newspaper clippings, pieces of paper written on with crayons or pencils, machine-typed texts, etc. The title of the exhibition derives from his first book I Have No Time actually published in 1979. Here is how Stilinović himself comments on it: “I was writing this book when I had no time. Hence my request to the readers to also read it when they have no time.”

The books which are part of this exhibition have hitherto been presented at the “Subtraction of Zeroes” exhibition in the Center for Contemporary Art “Platform Garanti” in Istanbul in 2008; in the Van Abbemuseum in Eindhoven, as well as at the “Mladen Stilinović: Artists Books” exhibition organized by e-flux portal at the Cooper Union School of Art in New York, in the spring of 2010.

The Museum wishes to thank Adam Niewiński, Krzysztof Nowakowski and Andrzej Sykulski and the members of The Society of Friends of the Museum of Modern Art in Warsaw. 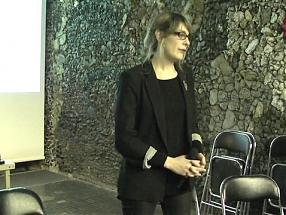 Mladen Stilinović. I Have No Time