“?” at the Museum of Modern Art in Warsaw presents a new appraisal of the work of the Slovak artist Július Koller (1939-2007), an iconic figure in the history of the neo-avant-garde and post-avant-garde. Since the rediscovery of his work in the early 1990s by Slovak artists and intellectuals, his work has been an important inspiration for artists throughout Eastern Europe. Only recently has Koller’s practice received wider recognition from the Western art world, becoming a key reference point for a younger generation of artists worldwide.

The exhibition includes a large number of works, archival documents, and ephemera produced by Július Koller not previously shown to the public. In his artistic practice, Koller deliberately multiplied and varied his works, dignifying worthless objects of common use with his personal signature and thus undermining the art world’s principles and commodity rules. Disturbing the significance of precious singular art object, the artist made full use for documentary purposes of amateur photography and copy machine The exhibition shows the breadth, scale, and the conceptual rigor of Koller´s work, as well as the wide range of his artistic methods. It also aims to generate a new approach in the interpretation and presentation of the artist’s practice. Of considered attention is Koller’s strategy of using real objects, the real world, and everyday life as a given program for displacement; a strategy intended to put an end to aesthetics and to create a “new cultural situation,” resulting in a “new life, a new creativity, and a new Cosmohumanist Culture.” The exhibition architecture, created by the artist Josef Dabernig, refers to this genuine artist’s grammar whilst also addressing the modernist architecture of the exhibition space and its former purpose as a furniture store.

The question mark “?” was Július Koller’s signature, subject matter, and medium from 1969 onward. It was for him a universal symbol of doubt — it did not simply function as a sign that questioned the social and political situation in Czechoslovakia. This sign is even more pertinent today, as it stands for the multiple political, social, and economic uncertainties of the world we live in, and as a skeptical remark to the market driven proliferation of the globalizing art system. Koller has featured the question mark repeatedly in his work as an expression of uncertainty and as a question to the suppressive power of the hegemonic state apparatus and the technoid phantasies of late modernism, and also as a communication sign addressed to mankind. The appellative call of Koller’s question mark remains relevant today. In “times of research, search, doubts, questions and question marks, …. nothing is simple or unequivocal any more,” Koller stated in 1978, “the so-called world has become unbelievably complicated and even more incomprehensible.”

In the mid-1960s, Koller published his first manifesto: “Antihappening (System of Subjective Objectivity).” Koller declared activities from various segments of his life as Antihappening: his work as a painter; military service; playing sport; life with his partner; pedagogical work. Antihappening stressed the artist’s personal engagement in the process of becoming aware of a social reality, and of introducing alternative ways of having an effect on others by unspectacular means. From 1967 onward, he painted object-pictures in white latex paint that for the first time included the motif of the question mark that was later to become the universal symbol of his interrogation of everyday life. As a reaction to empty exhibitionism in times of political instability, he distributed telegrams worded “UmeNie” [No Art].

In 1970, two years after the Prague Spring had been put down by the tanks of the Warsaw Treaty, Koller introduced the acronym U.F.O. into his work: “Universal-Cultural Futurological Operations.” Over the next three decades he created his major group of works under the same name, while he himself became the subject of a series of annual portraits known as “U.F.O.-naut J.K”.

Tennis and table tennis are not only recurring motifs in Koller´s work, but also a political statement. He drew tennis courts on postcards, retraced the lines of a tennis court with chalk, and invited the public to table tennis tournaments instead of exhibitions. For Koller, the concentrated game principles and procedures of sport refer to a democratic fair-play situation with clearly defined rules; a perfect expression of his utopian ideas in a world otherwise shaped by arbitrary political rule-making and rule-breaking.

In November 2016 the comprehensive retrospective of Július Koller will be exhibited at mumok, Vienna.

Curatorial collaboration on the side of the Museum 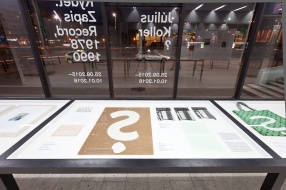 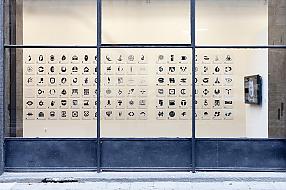