The point of departure of the exhibition “Lest The Two Seas Meet” is the moment – difficult to grasp – when individuals transform into a collective subject, and when individual stories, desires and aspirations begin to form a social movement turning the needs and discontents of individuals into political action.

The exhibition curator is Tarek Abou El Fetouh, born in Cairo and based in Brussels. El Fetouh created many exhibitions and artistic initiatives in the Middle East: director of the Young Arab Theatre Fund, initiator of the travelling biennial Meeting Points, and more recently, curator of the cyclical show Home Works VI, under the auspices of one of the region’s major organizations, Ashkal Alwan in Beirut.

The exhibition features works by renowned artists, such as Mona Hatoum, Emily Jacir and Walid Raad, who have gained recognition on the international scene, and by artists of the middle and young generation from Middle East, China, Korea, Singapore, Ukraine and Poland, a fact that highlights the universal character of emancipatory pursuits and attitudes. El Fetouh approaches the exhibition as a kind of philosophical mission, aiming to reveal the universal nature of the metamorphosis of the private into the public, a process that occurs in the body and gives rise to diverse kinds of political transformation.

The exhibition is set against the background of hopes inspired by the interrupted Arab Spring, the significance of which has yet to be fully described and the profound consequences of which remain ambiguous. The Arab Spring began symbolically with a dramatic gesture of an individual: the self-immolation of Mohamed Bouazizi at the end of 2010 in Tunis. The dramatic act shifted the sense of injustice from the private to the public sphere, stirring a wave of protests on an unprecedented scale. Protesters took political initiative by gathering on squares and marching in demonstrations that involved thousands of people – protests that soon spread beyond the Arab world and sparked Occupy movements worldwide.

“For politics to take place, the body has to appear", writes Tarek Abou El Fetouh in his curatorial text, "and for emancipatory actions to take place, the plural collective body has to appear and occupy spaces. Each participant in the protests offers his or her individual body, which then exists between two forms, the individual and the collective, within conditions that are enigmatic.”

To approach this key moment of passage from the individual to the collective body, El Fetouh refers to the concept of the 13th-century philosopher Ibn ’Arabi, barzakh, which literally means “isthmus” and pertains especially to an invisible line that separates two seas, each with its own density, salinity and temperature. For Ibn ’Arabi, the term means “anything that simultaneously divides and brings together two things.”

Through the artists’ works that have been selected, the exhibition offers insight into the state “in between”: between old and new, individual and collective, political and private. The challenges that bring protesters into public squares cannot be addressed using existing political discourses and fixed concepts. It is necessary to define the political anew. It was for a reason that crowds gathering in Tahrir Square did not voice the need to fight for democracy but for social justice, addressing ethics rather than politics; it was for a reason that Occupy movements did not want to tap into the established forms of organization and turned instead to archaic forms of direct democracy.

Thus El Fetouh attaches great importance to a careful examination of the meaning of emancipation that is but faintly sketched. He does not seek its sense in political diagnoses formulated by the media, but in individual motivations. The curator focuses on transformation as it occurs in the human body – the crucial source of all things political. He is interested in the body as a source of resistance – the body that, in a situation of resistance, enters an ambiguous state referred to as barzakh. Therefore his method of tracing political change is to approach the body in a situation of transformation – at the moment of death, for example, and when it becomes a means of emancipation, or when it is imagined in the post-human condition foreshadowing the future.

This exhibition was made possible by a generous donation from Rana Sadik and Samer Younis. 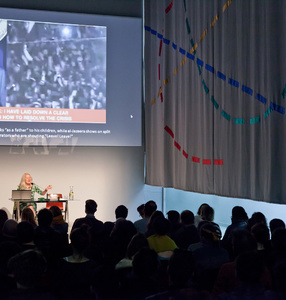