Auditorium Moscow. A Sketch for a Public Space

With 14 million inhabitants and 101 billionaires, Moscow is Europe’s biggest city, and perhaps its most contradictory.

The blueprint used to rebuild the former capital of the socialist world is brutal. Fueled by a burgeoning resource economy, the city goes global, with financial and cultural involvement in all the other global capitals, and with massive migration of cheap labor from Central Asia. But at the same time, Moscow refuses to see its problems and its possibilities. It isolates itself from the world to which it belongs, constantly in danger of becoming a provincial megalopolis. The lack of a real public sphere - both in literal, spatial and figurative senses - is part of the problem. The vast open spaces left behind by communism almost never become places for people. Yet despite all the authoritarian governance and the much-lamented absence of politics, people realize that there can be no civil society on the basis of movie theaters, shopping malls, condominiums and fancy cafes alone.

The city’s messages remain intense. Its history is still intriguing as an alternate modernity, and its current transformation continues to generate new subjects, new social structures, new fields for experience, new conflicts, and new spaces of hope. Moscow’s counterparts are not just New York, London, and Dubai, but the other capitals of the former socialist world, where people face some similar challenges in taking over those open spaces which can be places for people. So what is to be done? Most of the answers to this classical question are virtual, either online, or, more interestingly, locked into anabiosis in the urban fabric that surrounds us.

It is the same in contemporary art. So many new institutions promise a new public sphere and new contacts to the international scene. But they all too often ignore the real conflicts upon which that public sphere would be founded. For now, like in the shopping malls, their owners are out to sell audiences routines of fast, passive-aggressive consumption and mass tourism, in which it is hard to really engage with the art and the artists that make it. Inequalities and conflicts are carefully hidden. A more relevant public art, too, remains virtual, ephemeral. But maybe it is possible to do things otherwise?

In the project “Auditorium Moscow,” the curators will test the hypothesis of a new public platform for contemporary art at the very center of the city and at the heart of its contradictions. Drawing upon the experiences and the collection of the Warsaw Museum of Modern Art, it projects a school, a club, and an exhibition that will unfold not only in space but also in time. Over the course of four weeks, “Auditorium Moscow” will offer a dense program of workshops, screenings, and roundtables with artists and theoreticians from Poland, Germany, Israel, the Netherlands, and Latin America, examining the question of public spaces and the constituencies that inhabit them, in both urbanism and art. A special group of students will accompany and help to realize the project, recruited mostly from Moscow’s two emerging art schools, the Moscow Rodchenko School for Photography and Multimedia, and the Institute for Problem of Contemporary Art (IPSI).

The exhibition will change over time, combining pieces from the collection of the Warsaw Museum of Modern Art with newly commissioned work, including video installations and films by Aernout Mik, Artur Zmijewski, and Yael Bartana, and Russian artists Sergei Bratkov, Olga Chernysheva, and Chto delat. Polish Artist Zbigniew Libera will present new photographs of his view of contemporary Moscow. The project’s main discussion space will feature a specially designed auditorium by Slovenian-born artist Tobias Putrih. “Auditorium Moscow” will open with a mini-conference on “Institutions, Cities, and Political Culture,” featuring Charles Esche (Vanabbe Museum Eindhoven), and Krytyka Polityczna (Warsaw). Miguel Robles-Duran will hold a workshop on the problems of gentrification in Latin America. Dutch artist Matthijs de Bruijne will attempt an artistic cartography through the eyes of Moscow’s migrant workers, and report on the Migrant Worker Museum in Beijing. Berlin-based composer and filmmaker Christian Von Borries will hold a workshop on auditory violence and urban soundscaping. Polish artist and curator of the forthcoming Berlin Biennial Artur Zmijewski will hold a discussion of activists from Moscow and Petersburg. In the days of the Moscow Biennial’s opening, Cuban artist Tania Bruguera will show a performance.

Auditorium Moscow is the first project at the historical location of the Belie Palaty, a 17th century townhouse located at the very beginning of the city’s so-called Golden Mile. This neighborhood has undergone a fundamental gentrification over the last ten years, but the building’s gates have been closed for the last 20 years. On its steps, there is an improvised memorial for human right lawyer Stanislav Markelov and journalist Anastasia Baburova who were assassinated by neo-Nazis here on January 19th 2009. On the house across the street, a memorial plaque notes that this was the seat of the Jewish Anti-Fascist Committee, whose head Solomon Mikhoels was killed in 1948. A monument to Friedrich Engels sadly peers over to the reconstruction of Christ the Savior Church, where the Palace of the Soviets was never realized. This is an intriguing location that will continue to host projects dedicated to contemporary art in its urban surrounding.

The project Auditorium Moscow was initiated by the Museum of Modern Art in Warsaw in cooperation with curators Ekaterina Degot and David Riff. Established in 2005, the Museum is located in the temporary premises and its building is in the process of construction. The program of the Museum at the moment is very much defined by the social changes in former Eastern Europe therefore the initiation of the public debate is the Museum’s main focus. For this reason the Museum is interested in sharing its knowledge in defining public space and at the same time would like to understand the ways how the notion of public space is reformulated in other societies under the transformation.

Implemented under the project 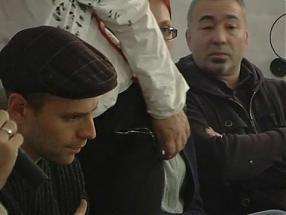 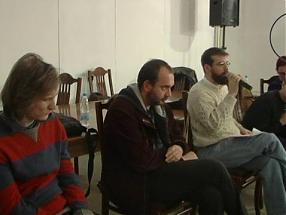