3xYES is a presentation of this year’s purchases, benevolences and deposits to the collection of the Museum of Modern Art in Warsaw.


This time, the Museum set itself the goal of determining whether the process of creating its collection can become an open debate about art. In the broader international context, the Museum is trying to address the key question: “yes” or “no” to socially engaged art. This is a multifaceted question which polarizes various attitudes and opinions not only in Polish art.


The collection opens with a drawing called Museum, painted in 1956 by Andrzej Wróblewski. The institution of the museum is represented in the form of a dissection table which is a way to confront it with the crisis of the holistic vision of history and of the world. The title itself, 3xYES, refers to another painting by Andrzej Wróblewski, entitled Waiting Room: Poor or Rich from 1949, showing a snapshot of a people’s plebiscite propagated with the slogan “3xYES”. Through this reference, the question acquires a historical dimension and brings to mind all the dramatic choices made in times when participating in socialist realism was compulsory.

A strong “yes” to socially engaged art is expressed by Artur Żmijewski. It has been voiced in this manifesto of Applied Social Arts. The artist has handed over his paramount work “Democracies” to the Museum’s collection.

Krzysztof Wodiczko looks at the problem of art engagement yet from another perspective, which is demonstrated in his Self-portrait from 1973. The painter reminds us about the potential traps caused by autonomy of art and the narcissistic character of the artist, which may lead to a detachment of art from reality.

Propaganda is another topic which is strikingly present in the collection exhibition and shown in many of its aspects. A few of the exhibits are the artists’ tools to probe the tricks and efficiency of the language of propaganda – they test the timespan throughout which symbols maintain their emotional charge. The potential to stir emotions by using a seemingly dead language of Zionist propaganda is exposed by Yael Bartana; communist propaganda is the subject of Deimantas Narkevicius’s work and Jadwiga Sawicka strongly opposes to the language of propaganda. The work by KwieKulik shows more intimate relations with this phenomenon.

Paradoxically, contradictions and irony are as effective as engaging in the right cause. The works of Oskar Dawicki, for instance his List, which is a collection of signatures under an empty petition, demonstrate this belief.

Wojciech Bąkowski, All of Everything, 2009

looped film
purchase of the Museum of Modern Art in Warsaw

Oskar Dawicki, Nigdy nie zrobiłem pracy o Holokauście (I Have Never Made a Piece About the Holocaust), 2009

Deimantas Narkevicius, Into the Unknown, 2009

photographs
deposit made by Katarzyna and Paweł Prokesz

gwasz na papierze (gouache on paper), 40 x 31 cm
purchase by Society of Friends of the Museum

20 documentaries
donated by the artist 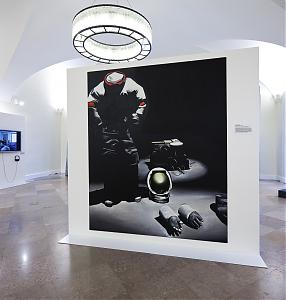