The Museum of Modern Art in Warsaw invites the public to the lecture of a British art historian, T. J. Clark.

Picasso's „Guernica” continues to have a life in the politics of the 21st century. It has established itself as our culture's Tragic Scene. In the struggle against state violence and enforced conformism, it goes on being a potent sign, carried as placard or banner, reused as strip cartoon, sprayed on walls from Calcutta to Gaza. But why?

This lecture looks again at „Guernica” in relation to the notion of Tragedy, and in particular to the weight given in tragedy to the emotions of Pity and Terror. Picasso was an artist whose central subject became, from the mid-1920s onwards, the reality of violence in human life - the reality, the horror, but also the fascination. He was charged at the time (and still is) with an unhealthy, almost malevolent obsession with human beings at their worst, made all the more repellent by his constant twisting together of violence and sex. Is the charge justified? To some extent, surely Yes. So how did „Guernica” emerge from such a matrix? What picture of suffering, horror, dislocation, but also community and 'humanity', does it offer?

Clark is the author of a series of books on the distinctive forms, and social and political character, of modern art: The Absolute Bourgeois: Artists and Politics in France 1848-1851 (1973); Image of the People: Gustave Courbet and the 1848 Revolution (1973); The Painting of Modern Life: Paris in the Art of Manet and his Followers (1984); Farewell to an Idea: Episodes from a History of Modernism (1999); and Picasso and Truth: From Cubism to Guernica (2013). He has had a long association with Retort, the Bay Area group of artists and activists, and in 2005 was partly responsible for Retort’s book Afflicted Powers: Capital and Spectacle in a New Age of War. A pamphlet on the state of Left politics in the 21st century, Por uma esquerda sem futuro (based on an essay 'For a Left with No Future' originally published in New Left Review), came out in Brazil in 2013. It was preceded by Modernismos: Ensaios sobra política, história e teoria da arte (2007, ed. Sônia Salzstein). Clark’s books and essays have been translated into a dozen languages.

Clark’s account of the process of looking at two paintings by Poussin, The Sight of Death: An Experiment in Art Writing, appeared in 2006. For the past several years he has written art criticism regularly for the London Review of Books. In 2013 he co-curated (with Anne M. Wagner) the exhibition Lowry and the Painting of Modern Life at Tate Britain, and collaborated on a book with the same title. In 2017, on the occasion of the 80th anniversary of the bombing of Guernica, he co-curated (with Anne M. Wagner) an exhibition at the Reina Sofia Museum, Madrid: Pity and Terror: Picasso on the Path to Guernica. A book of the same name accompanied the show.

Heaven on Earth: Painting and the Life to Come, with chapters on Bruegel, Giotto, Poussin and Veronese, came out in Fall 2018. A book entitled The Thing Itself: Cézanne, Pissarro, Matisse is in preparation.

Language of the lecture 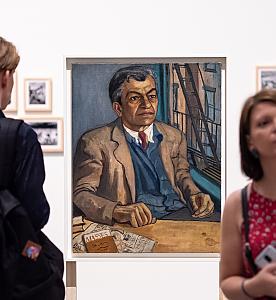