What is TypoPolo and where does it come from? How does independent applied graphics develop today? What inspires young graphic artists and what are the traditions they would like to refer to?

The “TypoPolo, TypoActivism, TypoHistory” session will present the sources, contexts and inspirations of young independent applied graphics in Poland. It will also bring closer new, out-of-aesthetics areas in which applied graphics develops today, referring to social issues and local context, as well as invoking and stimulating small bottom-up initiatives which enhance the revival of lost pre-war craft traditions. Thus the reflection on the role and function of designing and the designer and his/her responsibility for and towards the times he/she lives in.

The session is devoted to the problems of typography, the history of signboard-making, urban activism and alternative designing practice.

Introductory lecture to the phenomenon of TypoPolo, showing the sources, inspirations and references which stimulate quests connected with amateur spontaneous graphic designing.

The year 2013 marks the beginning of unprecedented cooperation between the BWA Dizajn gallery in Wrocław, the City Transport Company and typographers. The outcome of the action is the publication entitled: “Typoaktywizm-przewodnik. Wrocławskie cyfry taborowe." /”TypoActivism-guide. Wrocław transport in digits.”/, which, next to documenting the project, also serves as a mini instruction guide for similar bottom-up initiatives. A Typoactivist is an active individual, member of an informal social movement who, through collective actions, strives after a realistic change in the area of visual culture. During the lecture, Marian Misiak is going to present the project and the book entitled: "Typoaktywizm-przewodnik. Wrocławskie cyfry taborowe".

The lecture will be devoted to graphic designing in the neglected public sphere. Small entrepreneurs’ shops and service outlets to a large extent determine the visual character of a city, but good designing rarely gets to such places. Can this be changed? Can designing be a form of social involvement? What are the opportunities, limitations and challenges of such actions? The lecture will be connected with the announcement of the www.douslug.org service.

From the end of the 1070s, Jolanta Sieczkowska manufactured signboards, advertising inscriptions and shop window decorations. Employed in a decorator’s studio on Foksal street, she acquired lettering skills which a few years later allowed her to get a lettering diploma of the Chamber of Crafts. What does a typical day of life of a representative of this profession look like? How was Warsaw seen with the eyes of a letter painter? How many wasted hours of work could an innocent typo cause? Jolanta Sieczkowska will reveal the technique of a certified signboard maker.

graphic designer and programmer. Studied at the Gerrit Rietveld Academie in Amsterdam. Preoccupied with designing communication and visual identification and with strategic designing.

graduate in Polish Philology at the University of Wrocław. Organizer, activist, producer of artistic events. Co-author of the Secret Cinema concept. Editor of the Biuro magazine. On everyday basis works for the Dizajn – BWA gallery in Wrocław. In 2013 he performed the function of curator of the BASK artistic scene and co-author of the BASK 2013 concept. In 2011 nominated for Szczyt Kultury – award of the G-Punkt portal for the best organizer of cultural activities in Lower Silesia.

designer, poster artist. In the opinion of John Foster, author of the book entitled New Masters of Poster Design: Poster Design for the Next Century, belongs to the world’s most important poster artists of today. Creates visual identifications for Pogo, Festiwal Łódź Design, Wyborowa etc. Interested in actions from the borderland of art and design. Cooperates with such cultural institutions as the Museum of Art in Łódź, the Centre for Contemporary Art Ujazdowski Castle and the Design – BWA gallery in Wrocław. His works include both disciplined, simple compositions and realizations born out of his fascination with camouflage, graphic noise and aesthetics of the excess.

graduate in philosophy and history of art at the University of Wrocław; head of the Dizajn – BWA gallery in Wrocław, curator of exhibitions by such monograph designers as Fontarte (Magdalena and Artur Frankowski), Hakobo (Jakub Stępień), Łukasz Paluch. Author of the "Teraz Dizajn!" educational programme and curator of MFF T-Mobile Nowe Horyzonty.

association bringing together designers and sociologists. Helps sociologists act creatively and helps designers pull themselves together in the social context. Examines the city, experiments and implements realistic solutions. Now, Miastodwa is preoccupied with graphic designing in the urban sphere, mainly focused on small entrepreneurship.

designer, researcher and design curator. Graduate of the Academy of Fine Arts in Warsaw. Co-founder or Mamastudio (2001-2008), one of the first independent design studios in Poland. Co-founder of the Association of Applied Graphic Designers (STGU) and the Design Critique Platform – a think tank focused around the culture of design. Teacher and head of the Communication Design specialty at the School of Form in Poznań.

designer, curator and author of exhibitions. Studied at the Academy of Fine Arts in Cracow. As a graphic artist, she actively cooperates with the Małopolska Institute of Culture, elaborating and illustrating the “Autoportret” quarterly. Cooperates with Zamek Cieszyn as designer and curator. Since 2011, employed at the Faculty of Art of the Pedagogical University of Cracow.

sociologist and mediator. As part of her preparations for the PhD, she conducts research on participatory designing of common spaces. Cooperated with the Polish Sociological Association on its works on the exemplary model of social consultations for big-city spaces. 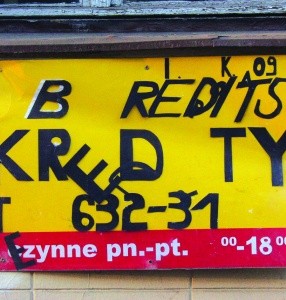