Strategies of speaking about Roma identity
Screening and discussion

The Ukrainian Roma communities that have arrived in Poland since February 2022 are probably more numerous than Polish Roma communities (around 70-80 thousand). The communities that seek refuge from the war aren’t always warmly welcomed, neither in Poland nor in other countries. Although they have legal Ukrainian documents and citizenship, they are often refused basic humanitarian help, such as housing, food or financial support. Due to popular stereotypes about being Roma/Romni, these communities are often excluded from support, education or work systems. Roma communities have been discriminated against for hundreds of years, and the current crisis only amplifies this.

What does it mean to be Roma today? What are Roma and Romni fighting for? What do Roma artists say about this in their works? We invite you to a screening of the performance “Roma Armee” produced by the Gorki Tрeater in Berlin and a meeting with Roma artists and experts on art created by discriminated and minority groups. The performance, based on the concept developed by the Selimovic sisters, will serve as a point of departure for discussing art created by Roma people and contemporary strategies of speaking about Roma identity. The discussion will be moderated by Monika Wychert, and the participants include Krzysztof Gil, Katarzyna Lewandowska and Paulina Piórkowska.

The event is co-organized by the “W Stronę Dialogu” Foundation, that supports Roma refugees that have arrived to Poland after the beginning of the Russian full-scale invasion of Ukraine in 2022.

​​At a time when Europe is at risk of drifting into neo-fascism, a group of actors is calling for a Roma army for the purpose of self-defence. A rapid intervention force to fight structural discrimination, racism and antiziganism, but also as emancipation from an internalized role of victims. The actors are Romnija, Roma and Romani travellers from Austria, Serbia, Germany, Kosovo, Romania, England and Sweden. They are also Israeli-German-Turkish-Berlin Gadjé – that means that the Roma Army is supranational, diverse, feminist, queer. Initiated by the sisters Simonida and Sandra Selimović, they are entering the stage at the Gorki in a collective act of selfempowering artistic action with resident director Yael Ronen: through a joint research process, personal experiences, historical contaminations and contemporary incidents are explored and used to develop a play. Together with visual artists Delaine and Damian Le Bas from England, they sketch out a vision for a Safe European Home in Gypsyland Europe, as the Le Bas call it. 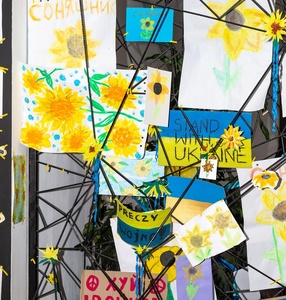