How should we call the epoch after the end of the world? Anthropocene? Capitalocene? Chthulucene? How will the relationship between human and non-human beings look like in this new reality?

In order to design our common future we have to give space to perspectives of other species that for hundred of years have been observing human activity and its consequences for the planet.

HER Docs Film Festival, the Department of Presence at the Museum of Modern Art in Warsaw and Komuna/Warszawa present screenings of two films by Lithuanian directors: “Acid Forest” by Rugilė Barzdžiukaitė and “Animus Animalis (stories people, animals and things)” by Aistė Žegulytė. In their movies both authors give up human exceptionalism and individualism to ask questions about the possibility of being-with and feeling-with non-human beings. They undermine our seemingly stable system of knowledge and beliefs, challenge the popular vision of “nature” and question the idea of the museum as a space for collecting and cataloguing experiences.

ACID FOREST dir. Rugilė Barzdžiukaitė
Can you imagine a tourist attraction where people come to see a dead forest? Where they are not only observers, but also the ones being observed and heard by the black birds?

There used to be an ancient pine forest, but then several cormorants landed there. Now there are thousands of birds and they kill the pine trees by… shitting. The human observations and responses to this environment are as multi-layered and bizarre as the history of the forest itself. The film is set in the Curonian Spit, which is a very scenic peninsula in Lithuania, edged by the Baltic sea from one side, and the lagoon from the other. It is a UNESCO heritage site, rich in natural resources and high-end beach resorts. For many people, the cormorant colony is a black spot in a heavenly setting. “Apart from the main storyline, I kept my focus on playful dialogues, illustrating how a range of political questions, historical narratives, migration vectors and cinematic experiences interveneinto the human projections of nature. I hope it helped an environmental paradox of Acid Forest to become a metaphor for a surreal world that we are living in” – says the director of the film.

After the screening, we invite you to take part in a discussion hosted by Robert Jurszo – a journalist and publicist, writing about nature protection, hunting, animal rights, smog and climate. The meeting will be attended by Magdalena Siemaszko – an activist associated with the Camp for Forest. (The discussion after the screening will be held in Polish.)

ATTENTION!
Due to pandemic restrictions the number of seats available in the screening room is strictly limited. We’ll only be able to let the first 70 people in for each of the screenings.

On top of that every participant of the event has to adhere to sanitary regulations:
-hand sanitization (hand sanitizer will be provided on site)
-covering mouth and nose during the whole event
- keeping at least 2 meters from other people (not applicable to guardians of children under 13 and assistants of persons with disabilities)

Those not following the regulations will not be allowed to participate in the event.

The film will be shown

The discussion after the screening 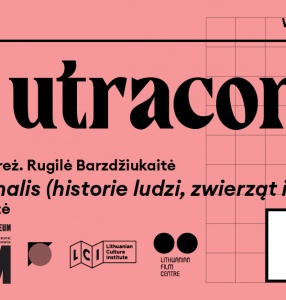