Events accompanying the opening of the “Rainforest V” exhibition include a concert of David Tudor’s and Phil Edelstein’s compositions and a public meeting with John Driscoll and Phil Edelstein from Composers Inside Electronics.

David Tudor’s Microphone was originally created for the Experiments in Art and Technology Pepsi Pavilion at Expo ’70 in Osaka Japan. The work arose from discoveries made through collaboration with the design of the Pavilion’s sound system which utilized 37 loudspeakers arranged in a rhomboid grid pattern covering a ¾ mirrored spherical dome.

Tudor used only two microphones, audio modulators, and the 37 loudspeakers. The highly directional microphones were aimed at random into the space and amplified to feedback level. The audio modulators designed by Gordon Mumma were placed in the signal paths in order to vary the musical content of the feedback signals.

Due to high levels of ambient sound in the dome this work was never recorded. A second realization was made at Mills College in 1973. Recordings from this realization were made for use in live performance, and are used in today’s performance. CIE is currently working on the recreation of the eight modulators so that the work can be realized once again without the recordings.

“Impulsions” can be implemented as installation or performance and is a work-in-progress designed to be a collaborative work for multiple performers.
It uses impulse recordings from resonant objects and the performers distribute theses impulses into the performance space using a combination of the direct impulse recording or transforming them through a convolution reverb to an array of output speakers or transduced objects.

Using a Max/MSP patch, each performer controls a pair of metronomes which trigger the playing of an array of impulse files. Each tick of the metronome advances the state of a pair of fractals with the resulting XY position used to determine which impulse files get played.

The performers control variables such as metronome rates, volumes of the direct impulses and the convolution reverbs used. Additionally, there is a routing network using similar fractals that varies the output volume and channel location with features available that allow for rotating and scaling the fractals to allow more performer control over the signal output.

JOHN DRISCOLL is a founding member of Composers Inside Electronics and collaborated on and managed the Rainforest IV project since its inception in 1973. He has toured extensively in the US and Europe with: Composers Inside Electronics, Douglas Dunn & Dancers, David Tudor, and also as a solo performer. His work involves robotic instruments, compositions and sound installations for unique architectural spaces, rotating loudspeakers, and music for dance. He has received dance commissions for his music including: the Merce Cunningham Dance Co., Douglas Dunn & Dancers, and the Dance Construction Company. He has received numerous awards including a Berlin Residency from the DAAD Berliner Künstlerprogam.

Driscoll was Manager of Arts & Technologies at the New York Hall of Science where he created an innovative Artist-in-Residence program. He also developed the first interactive computer-based exhibits in science museums titled “Science Links” and managed the development of “Sound Sensations” (an interactive exhibition on Audio Technologies) for the NYHOS.

He founded Shadow Interactive Inc. which developed educational software for Classroom Inc., Shedd Aquarium, NY State Dept. of Health, and others. He worked for over 15 years with Slingo Inc. developing one of the most popular online games on AOL titled “Slingo”, slot machines, lottery tickets, and TV game shows.

Driscoll has lectured extensively on interactive media, sound installations, online game development, and Rainforest IV. He co-authored a paper on Rainforest with Matt Rogalsky for presentation at the Getty Museum. He holds an MFA (Sculpture) from Tyler School of Art and an MFA (interdisciplinary arts) from SUNY Buffalo.

His work is available on Edition Block/Gramavision “Rainforest IV”, Orange Mountain Music’s “Composers Inside Electronics” – from the Kitchen Archives No. 4, “20 jahre Inventionen II” – Berliner Künstlerprogramm des DAAD, “Soundings” – Neuberger Museum (video), and he is currently preparing a CD of his Berlin works “Fishing for Sound”.

He is currently working on the dissemination of a self-running Rainforest V - installation version with installations in Mexico City and Governors Island, NY, and is creating a new set of performance and installation works using ultrasonic instruments.

PHIL EDELSTEIN’S studies at the State University of NY in Albany included computer science, theatre, math, physics and electronic music with Joel Chadabe leading to a B.S. in technology and art. He was a teaching assistantship in computer-based art with Alvin Lucier at Wesleyan University and one of the founding members of Electronic Body Arts. While at the Electronic Music Studio at SUNY Albany he developed implementations of real-time software based digital and analog synthesis techniques. He has been a board member at Harvestworks from 1987 to 2011.

His work on video synthesis, processing and Pantomation motion capture technology with filmmaker and videographer Tom DeWitt yielded works such as “Philharmonia”, “PWB”, “Multiple Identity Marathon”. This work was supported by the WNYC-TV Lab, NYSCA, and the Research Foundation of SUNY.

An extensive series of work emanated from his participation in the seminal New Music in New Hampshire workshop in Chocorua with David Tudor in 1973. As a core founder of Composers Inside Electronics, he has continued to carry through Tudor’s legacy into it’s 3rd decade with performances at Judson Church, Lincoln Center, Mexico City, Governors Island and many other venues. His work with Marsha Harris “Shrieks and Nuptials” is included on the CD: The Kitchen Archives No. 4 – Composers Inside Electronics.

He has held various as senior staff for financial institutions in the NY area in software and systems development. Prior to that he was responsible for software development for projects for other corporations including Digital Equipment Corporation, Xerox and GE.

His current work involves transformations of time series data and synthesis of resonance. 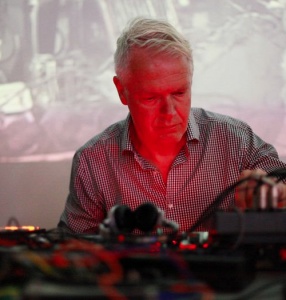 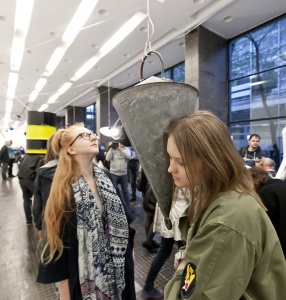