This seminar considers the conditions in which contemporary publics are formed and looks at some recent examples of performance in which the question of the public is explicitly addressed.

It seeks to develop some ways of thinking about the social and economic relations produced in the event of performance. What potential is there for such relations to unsettle the terms upon which publics and economies are constituted elsewhere, outside the field of performance as such? Is there, indeed, any elsewhere at all, as far as the scene of performance is concerned?

Registration requiered. Applications consisting of a bio (max. 300 words) and a brief explanation willingness to participate in the seminar (max. 500 words) should be sent to: zapisy@artmuseum.pl, with "Points of Convergence" in the subject line. Deadline: February 12, 2014.

Theatre and performance art professor at Queen Mary University in London. In his academic research, his main focus is performance in the extended spectrum of the theatre as well as the links between theatre, live art, performance and economy, the theory of audience, participative art, the notion of interactivity and interpassivity. 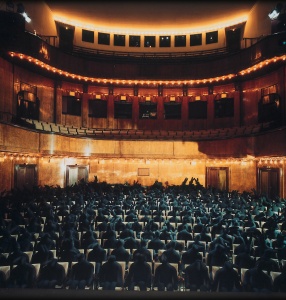