Occupy Wall Street and the Urban Struggle
WARSAW UNDER CONSTRUCTION 3

The lecture will review the existing street protests and urban movements, which created the conditions for the existence of a new urban phenomenon in the political struggle, that is "Occupy Wall Street".

Miguel Robles-Duran. Born in Mexico City, studied architecture at the ITESM in Monterrey, Sci-Arc in Los Angeles and The Berlage Institute, Rotterdam. In 1999 opened his office in the border region Tijuana-San Diego. In 2001 he was granted in San Diego the 2001 Honor Award of the American Institute of Architects and this year (2007) he won the “Designing Politics-The Politics of Design” Award given by the International Design Forum (IFG) in Ulm, Germany. His work is currently exhibited at The Architectural League of New York, World View Cities. He has taught theory and design at the Universidad Iberoamericana in Tijuana, Mexico, at "The new school of architecture" in San Diego, California, Woodbury University Los Angeles/San Diego, postgraduate urban design at K.U. Leuven, Belgium and architecture/urban design at The Berlage Institute. Presently he teaches a postgraduate thesis design studio and an advanced theory seminar, at TU Delft and the Berlage Institute, The Netherlands, where he is also conducting research as PhD candidate on contentious collective urban manifestations. Cohabitation Strategies is based in Rotterdam since 2004. 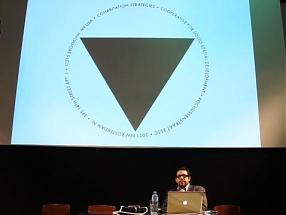