Images of revolution
Meeting with the filmakers and film screening pt. 1

The Museum of Modern Art in Warsaw invites to a meeting and film screening as part of the “Hope is of a different color” film program.

Film screening will last 60 minutes, it will be preceded by a meeting with filmmakers, Abdelkader Lagtaa and Stanisław Tym, led by Monika Talarczyk.

Documentary directed by Mustapha Derkaoui, academic advisors: Mieczysław Jahoda and Marek Nowicki.
An account of the preparations for the staging of Régis Debray’s Notes on Gramsci directed by Stanisław Tym. A group of international students gathered at Warsaw’s “Stodoła” club discuss philosophy and politics accompanied by the music of Włodzimierz Nahorny’s quartet.

Poetic short film directed by Idriss Karim, academic advisors: Janusz Majewski and Kazimierz Konrad.
A surrealistic portrait of restaurant guests as seen by an otherworldly visitor who has the ability to read people’s subconscious. The visual journey is complemented by Janusz Kusza’s political protest songs performed by students of the Academy of Music in Łódź. Film director Piotr Szulkin plays the role of the fakir.

Documentary directed by Beverly Joan Marcus, academic advisor: Stanisław Grabowski.
African National Congress (ANC) activist Patrik Mabinda arrives in Poland to speak about his struggle for freedom in the Republic of South Africa. Images from his presentation at the University of Lodz School of Polish for Foreign Students are juxtaposed with those from Mabinda’s visit to the Auschwitz-Birkenau concentration camp.

Poetic short film directed by Jam Karanja, academic advisor: Wojciech Jerzy Has.
A game of visual associations between ‘whiteness’ and ‘blackness’; ‘freedom’ and ‘constraint’. Performed by black and white actors.

More about the film program: "Hope is of a different color"

Participants of the meeting 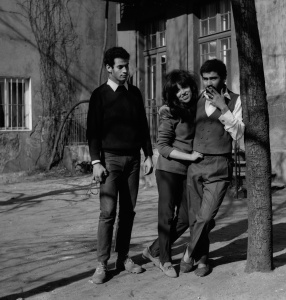 Blackness and race in the PRL | A familiar "Other"