The Museum of Modern Art in Warsaw invites the public to a screening of films by Australian artist Nicholas Mangan. The show will form a part of the program accompanying the exhibition “The Penumbral Age. Art in the Time of Planetary Change”.

On May 3, 2020, at 12:00, on our YouTube channel we will present Nicholas Mangan's three films. Each of them is part of larger, extensive projects based on archival research and artistic investigation.

the film reflects upon the 1989 civil war on the Pacific Island of Bougainville; a war that lasted over ten years and was ignited over disputed land use, ownership and compensation claims for land damage. "Progress in Action" pays homage to the BRA’s use of coconuts as an alternative source of fuel through the construction of a provisional coconut oil refinery that is used to produce coconut bio-fuel that powers a modified diesel generator. The electricity produced by the generator supplies power to a projector, which in turn screens a film about the events. This film features imagery of the very material that is at the core of the project: the Bougainville crisis. It is a portrayal of energy in exchange; a series of actions and reactions, flows and interruptions.

a video essay and installation that contrasts the ancient geological history of the Pacific island nation of Nauru with the country’s more recent political and economic situation. Over the coming decades the Nauruan government allowed mining to occur at such an intensity that by 1977, the tiny island nation of Nauru had become the second-richest nation per capita after Saudi Arabia. That year, as a sign of its wealth, Nauru built the then-tallest sky scraper in Melbourne at 80 Collins Street. Called Nauru House, it was crudely dubbed ‘Bird Shit Tower’ by many Australians.

As the artist has said: ‘I wanted to look at this moment in human history within a much longer period of time. I wanted to place human agency within the contours of a deeper time frame and an evolving ecosystem that doesn’t place humans as the primary organism.’

„Limits to Growth - A numismatic study of dead and dying currencies", 8,53 min.

The arrival of the first cryptocurrency Bitcoin amid the global financial crisis in 2008 brought about comparison with another, earlier form of currency known as Stone Money, the curious monetary form also known as Rai or Fei that captivated foreign voyagers who came into contact with the island of Yap in Micronesia in the 1800s. Rai was carved from the limestone cliffs of Palau Island some 400 km from Yap with reef shells and transported back to Yap on outriggers and rafts often resulting in loss of life and imbuing the stones with a deep intrinsic value. "Limits to growth" presents a story of technology and cunning entrepreneurialism coalescing to bring an unexpected end to a unique economic system.

The film screening will be preceded by the director's lecture.

LINK TO THE SCREENING: Vogue.pl

Link to the screening 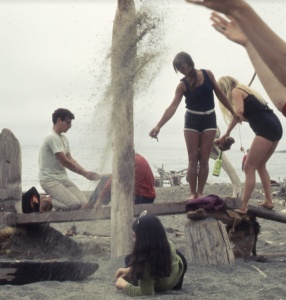