The concert will be the result of a collaboration between the Cracow visual artist Joanna Pawlik and her outsider friends - Wiktor Okrój and Agata Wąsik.

The “Don't You Dare Write” concert will be the first performance of amateur musician Wiktor Okrój's music pieces. The artist has been composing music and writing lyrics since 2006 that have not yet been presented in front of a wider audience.

The concert's director, Joanna Pawlik, who works with Okrój on a daily basis in the Artes workshop in Cracow, invited musicians Paulina Owczarek and Ernest Ogórek, as well as Paweł Tomaszewski, a renowned film and theater actor, to cooperate on the performance.

Okrój creates music using music software and a synthesizer. His electronic pieces will be played back from the computer during the concert, and will serve as a theme for the musicians’ free improvisation. The music will also be the background for an interpretation of Okrój's lyrics by Tomaszewski and the singer himself.

inspired by Tomasz Szwed's song titled “Poradnik początkującego kierowcy” (“A beginner driver's guide”), he started writing his own poems and lyrics in 2006. In 2011, using a computer, he started composing music. His songs are about his life - both the good and the painful side. Despite the difficulties resulting from his disability, he is very creative, constantly trying to reach new listeners. Wiktor Okrój has had meetings organized at the Moliere club in Cracow, the Old Town youth culture center in Cracow, as well as at the special purpose school and education center for blind and hearing-impaired children in Cracow. He has participated in meetings of the Youth Circle of the Polish Writers’ Association led by professor Bogusław Żurakowski. A theater play based on his music and lyrics, titled “Nie ma jak na wsi” (“There's no place like the country”), was directed by Aleksandra Barczyk.

born in 1974, lives and works in Cracow. PhD student at the Pedagogical University of Cracow's Art Department. She graduated from Cracows’ Academy of Fine Arts (she studied painting in 1994-1999, graduate project completed in professor Leszek Misiak's workshop). She is interested in painting, drawing, photography and video. Joanna Pawlik's art balances between the issues of social mechanisms of exclusion and personal spaces of feeling. In her works, including the videos “Balans” or “Schody”, she examines the boundaries of her own body, working out the notion of “social norm” and - often in an unexpected way - attacks “disability”. In recent years Joanna Pawlik has been working with amateur artists on projects such as the “Myślę, że jesteś dziwny i bardzo cię lubię” exhibition at Małopolski Ogród Sztuki in Cracow. She has had numerous individual exhibitions (including “Balans” at Bunkier Sztuki Gallery in Cracow; “Ekonomia Utraty” at Galleri 69 in Oslo; “Spacer” at Galeria Czarna in Warsaw, 2009; “Bez Śladu” at Otwarta Pracownia in Cracow, 2006). Joanna Pawlik's works have also been presented as part of group exhibition - recently at the Museum of Contemporary Art in Cracow; Fotogalerie WUK, Vienna; DOX Contemporary Art Center, Prague. She is the recipient of awards, prizes and scholarships. She was awarded at the 37th Biennial Bielska Jesień in 2005, received the grand prix at the Biennale Sztuki Młodych Rybie Oko 5 in 2008, a scholarship of the Minister of Culture and National Heritage in 2013, the “Młoda Polska” Scholarship in 2010, a residence at the 18th Street Arts Center in Santa Monica, California in 2010. Joanna Pawlik's works are in both private and public collections, including the Museum of Contemporary Art in Cracow, the Bunkier Sztuki Gallery collection in Cracow and Piotr Bazylka's collection.

Paweł Tomaszewski
born in 1983 in Warsaw. He graduated from the acting department of Cracow's Academy for the Dramatic Arts in 2006. He participated in numerous acting workshops, in London and Los Angeles among other places. In 2008 he was named the best new coming male actor for the lead role in Grzegorz Pacek's “Wednesday, Thursday Morning” at the Młodzi i Film festival in Koszalin. He has played in movies by Andrzej Wajda (“Sweet Rush”, “Walesa”), Jerzy Stuhr (“Obywatel”), Jan Komasa (“Warsaw 44”), Greg Zgliński (“Courage”), Lars Jenssen (“Hochzeitspolka”) and Marcin Wrona (“The Christening”), among others. He charmed the audience as the hotel bell boy in the “Hotel 52” TV series, directed by Michał Kwieciński and Grzegorz Kuczeriszka. He has played numerous theater parts, at the Polish Theater in Bydgoszcz, the National Stary Theater in Cracow and the Drama Theater in Wałbrzych among others. The most important ones include: Oscar in "Tin Drum” directed by Adam Nalepa at Teatr Wybrzeże in Gdańsk, Monk/Bogdan Jański in “Klub Polski” directed by Paweł Miśkiewicz, Jakub Szela's son in Monika Strzępka and Paweł Demirski's “W imię Jakuba S.” at Teatr Dramatyczny in Warsaw. For over three years, until September 2013, he was a member of the theater's artistic team. He is currently taking part in shooting for the TV series “Artyści”, based on a screenplay by Paweł Demirski and directed by Monika Strzępka.

born in 1985, saxophone player, graduate of the Academy of Music in Cracow. She plays the alto and baritone saxophone. Her interest is mostly in free improvisation and modern chamber music. She is a member of several groups: samBar, Instytut Intuicji, HiQ, Tajny and Saksofonarium. She takes part in projects on Cracow's improvised music scene (Bezdroża, Muzykoterapia, LabInt, Open Session), performances that mix improvised dance and music (Free the Dance, poszlaki|wątki|strzępy, Passing Through Workshop) and festivals of modern, experimental and improvised music (Hurta Cordel, Musica Electronica Nova, Taller de Musica Improvisada, AudioArt, Sound Exchange, Krakowska Jesień Jazzowa, Discordian Community Riot, Lublin Jazz Festival, Art of Improvisation, Musica Privata, Mirror Mirror). She is the initiator and founder of the Krakow Improvisers Orchestra. She has played with LANZA, OCD, MI65, Uncharted Territory and Satoko Fujii Orchestra, among others. She has collaborated with the London Improvisera Orchestra, Cracow's Stary Theater, Teatr Sztuk in Oleśnica and the Kraków Opera. She has taken part in first performances of saxophone music pieces. Her experience in collective conducted improvisation was gained through years of experience with groups such as LIO (London), Orquestra de Improvisación (Malaga), Sin Anestesia (Barcelona), Discordian Community Orchestra (Barcelona) and Satoko Fujii Orchestra (Berlin). She translates literature on improvised music and promotes the idea of spontaneous creation.

double bass player, bass guitarist. Improvising musician who also works in visual arts. He stopped his musical studies in order to get an education as a sculptor. He has worked with Cracow's improvisation groups: Sympli Romatikó, Krakow Improvisers Orchestra. In his daily work he is a cultural manager and teacher at Cracow's ARTzona. He is a PhD student at the Pedagogical University of Cracow's Art Department and runs the ARTzona gallery in Cracow's Nowa Huta district. 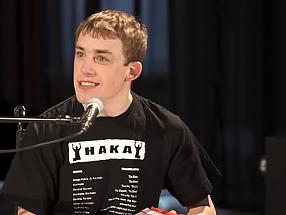 "Don't you dare to write". Concert by Wiktor Okrój 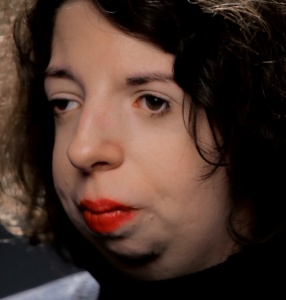 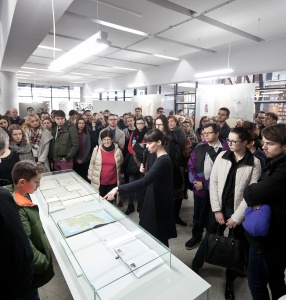 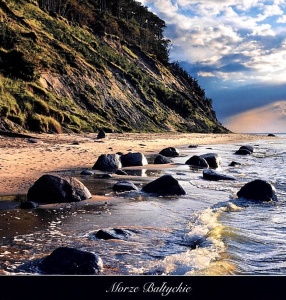