Karkowski - Xenakis
Part of the series “As You Can Hear”

The idea to perform Zbigniew Karkowski and Iannis Xenakis’ music during one concert cropped up in December 2013, after the Polish composer’s death. The choice seemed obvious, although noise music had been Karkowski’s trademark and he had rarely performed outside this scene.

There are plenty of arguments for this juxtaposition. In 1989 Karkowski was a resident at Les Ateliers UPIC, a centre for the development and promotion of computer-assisted composition system, created and applied by Xenakis. He also participated in several of Xenakis’ lectures at the Université de Paris I. Karkowski repeatedly admitted that this experience had been immensely formative for him and called Xenakis “a true visionary" and "a teacher different from all the others.” Many years later he initiated a project dedicated to Persepolis (1971), as part of which remixes of Xenakis’ electro-acoustic epopee were prepared by, among others, Otomo Yoshihide, Ryoji Ikeda, Merzbow and Francisco Lopéz. The project, executed under Xenakis’ patronage, resulted in a double album released in 2002, including Xenakis’ original composition and nine reinterpretations, including Karkowski’s Doing by Not Doing.

Both composers displayed a similar approach to sound: Karkowski used stochastic procedures typical for Xenakis’ work and achieved sound effects that evoked Xenakis’ musical pieces. James Harley, author of the book Xenakis: His Life in Music and the Greek composer’s student, perceives Karkowski as one Xenakis’ direct successors.
Karkowski’s interest in the other, “antique” side of the work of the author of Oresteia, an archaic rawness of references to the most ancient Mycenaean Greece, as well as traditional Japanese art, which is particularly evident in Xenakis’ works for chorus and drums, is all the less obvious and therefore more appealing.

The concert’s programme brings these narratives together: it links abstract but extremely intense and sensual electro-acoustic music by Karkowski with Xenakis’ ascetically ritual compositions for percussion: Rebonds A and B from 1987-88. The evening will culminate in the performance of Karkowski’s Encumbrance for choir and electronics – composed in 2009 upon Antoni Beksiak and "Gębofon” International Vocal Meeting’s request. As an introduction, Xenakis’ archaized choral piece À Hélène from 1977 will be performed.

The concert heralds a larger project devoted to the analysis of aesthetic interconnections between Zbigniew Karkowski’s and Iannis Xenakis’ work as well as focusing on instrumental music by the Polish composer, who is mostly associated with electronic music. Two concerts are planned: they will consist of four Karkowski’s pieces for a solo instrument and electronics, including Studio Varèse for double bass, finished shortly before his death and therefore never performed live. The next year’s event, organized by Sonora agency, will most probably take place under the name “Turning Sounds.”
(text: Monika Pasiecznik) 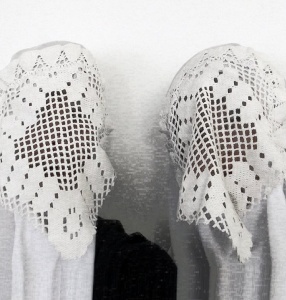