Living with Ghosts: Legacies of Colonialism and Fascism
Edited by L'Internationale Online

"Living with Ghosts: Legacies of Colonialism and Fascism", is a constellation of essays, conversations and images that point to the manner in which the legacies of colonialism and fascism reverberate in our present conjuncture, published on the L'Internationale Online platform.

The impulse for producing this issue was a question of whether it may be possible to trace the connections between the violences of the colonial project through the horrors of fascism to current forms of racism, identitarianism and populism – what we initially called 'an arc' of colonialism-nationalism-fascism.

These shifts are palpable in the contemporary political uncertainties expressed in this collection of texts. Each of the contributors reflect on the specificities of their environment through their lived experiences, through their artistic practices, or reflections on the curatorial climate. They seek to maintain a space for critical engagement and political criticism. Furthermore, this issue considers the layers of historical conditions that inform states of 'belonging' and 'sovereignty' (even 'citizenry' as a debatable proposition) in Europe. What becomes evident from these various contributions is that there is no sudden or surprising development towards the right – too often expressed an 'inexplicable phenomena' of contemporary society. They instead address it as a slow and steady movement based on historical events and political terms of reference which have remain unresolved and have again returned, this time through the opportunism advanced and fuelled by the structures of capitalism that connect Europe to Russia and America. Each is a case study that recognises the patterns of violence and inequality evident in the political structures of colonialism and fascism.

The publication is available for download in PDF and EPUB format on the L'Internationale Online platform.

1. Introduction
by Nick Aikens, Jyoti Mistry, Corina Oprea
2. On European 'Civilisation': Colonialism, Land, Lebensraum
by Gurminder K.Bhambra
3. A Conversation at Bamayak and Mabaluk, Part of the Coastal Lands of the Emmiyengal People
by Rex Edmunds, Elizabeth A. Povinelli
4. On White Innocence
by Gloria Wekker
5. i defied the lens so it struck us
by Quinsy Gario
6. Drinking from Our Own Wells Endarkened Feminist Epistemology as Praxis in a Persistent Economy of Lack
by Nkule Mabaso
7. What Haunts European Contemporary Politics: A Discussion with Walter Famler
by Jyoti Mistry
8. The Uncensored Censors: How We Say 'Appropriation' Now?
by Jelena Vesić
9. Towards an Anti-Fascist International: A View from Central and Eastern Europe
by Kuba Szreder
10. Biographies 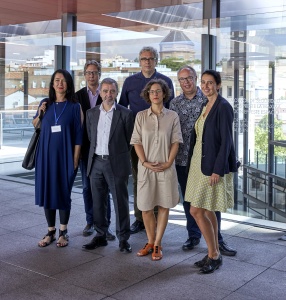