The jury has decided the competition for the conception for the observation point at the construction site of the new building of the Museum of Modern Art in Warsaw.

The aim of the competition is to erect a temporary observation point next to the construction site of the Museum of Modern Art in Warsaw. The structure will also serve as an information centre. It should acquaint visitors with the institution and the construction process for the museum’s new home. Our intention is for the observation point to be a symbol of the ongoing construction project. We sought an intellectually stimulating and engaging design, with an intriguing form, which would encourage the public to enter and learn more about the museum and its construction.

The jury rated highly the level of the designs submitted and their form of presentation. The submissions displayed an exceptional understanding of the mission of the institution, whose main aim is to present contemporary art, as well as a sensitivity to the urbanist context of the Warsaw city centre, in particular the proximity of the “Eastern Wall” of ul. Marszałkowska and the Palace of Culture and Science. The allusions to the tradition of art in public space, concern for broad access to the proposed solutions, and the creative employment of the debate lasting for several decades surrounding the development of Plac Defilad (Plac Centralny) are also deserving of praise.

There were a total of 33 entries in the competition. After reviewing the submissions, the jury decided to award the grand prize—execution of the winning design—to 94 Studio from Poznań (made up of Klaudia Gołaszewska, Marek Grodzicki, Kinga Grzybowska, Michał Hondo, Jakub Wójtowicz and Filip Zieliński). Three honourable mentions were also awarded, in the form of two-month internships at the museum, Warbud SA, and APA Wojciechowski sp. z o.o., to Agata Holdenmajer and Hugon Kowalski; Martyna Rowicka and Michał Michałowski; and Tomasz Czuban. The observation point will be erected under the contract with Warbud SA for construction of the Museum of Modern Art in Warsaw.

The designs were judged by a committee made up of:

The work takes the form of a frame placed on a base with the construction of a cubic grate, serving as the base for a platform enabling visitors to follow the progress in erection of the museum. The scaffolding making up the observation point corresponds to daily life on the construction site. The simplicity of form and the use of a steel construction as the main architectural means of expression gives a lightness to the mass. The observation point does not predominate, but engages with the surrounding space and invites viewers to examine the phases of the work on the site.

The viewing frame—the main inspiration of the design—symbolizes the institution of the museum, but also alludes to the tradition of art history in which the frame is interpreted as the crowning element of a painting, installed at the final stage of the artist’s work. This facilitates the presentation of the painting and reinforces its perception. As the designers of the work explained, “The Museum of Modern Art is a place that is the symbolic frame of a painting. It is a framing space, directing viewers to the artists’ original visions.”

The jury praised the simplicity of the design, which with its temporary character will accompany the ongoing construction, but without exacerbating the visual chaos of the city centre and the full-colour ads on the façades of ul. Marszałkowska. The selected technology will allow most of the materials to be recycled, and the principal material (tube and coupler scaffolding) will be reused after the installation is removed.

The jury awarded honourable mentions to the following works:

The observation point is composed of a wooden podium laid out in a circle, and fourteen two-sided mirrors. The podium can rotate along its own axis, while the mirrors installed above the podium provide a view of the construction site. The main strength of the work is its mobility, providing unexpected views of the museum as it rises. Additionally, the vertical elements are resilient and can respond to changing weather and the development of the project. The jury recognized the work for creating a user-friendly minor structure allowing convenient use of public space, and for the artistically interesting expression of the design, alluding to the tradition of kinetic art.

The work proposes a construction from prefabricated posts and beams (steel I-beams). They form a strong symbol in the space of Plac Centralny alluding to structures associated with construction: cranes, scaffolding, and substructures. Its scale (637 centimetres in height) suits the environment of urban buildings and would serve as a frame for an information board about the construction. The designers see a possibility for using the construction in the future for displaying current information about the museum’s activities, and also assume it could be fully recycled. The jury recognized the work for its allusion to the tradition of art in public space and for the artistically original form of presentation of the project.

The post-competition exhibition of all works will be on display from October 2nd till October 20th at the Museum on Pańska St.

Construction of the Museum of Modern Art is funded by the Capital City of Warsaw. 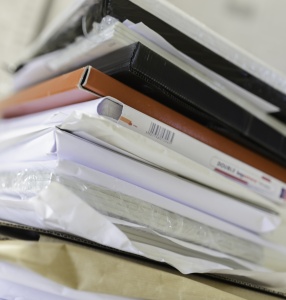 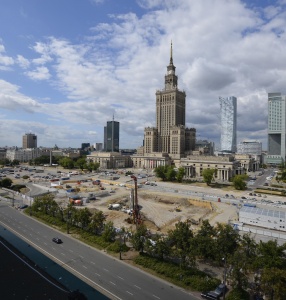