The Architecture of the Museum of Modern Art in Warsaw

The building was designed by Thomas Phifer (b. 1953), an American architect, whose portfolio includes the North Carolina Museum of Art in Raleigh (North Carolina) and Glenstone Museum in Potomac (Maryland).

In the design of the new home to the Museum of Modern Art in Warsaw, Phifer used basic geometrical forms, evoking rationalist architecture. Architects working in this trend, which was born in the Enlightenment and later developed, maintained that clean forms and structures can create a space without the need to introduce any decorations. They believed that classical beauty stemmed from the truth of using cubes, spheres, or cylinders. The two cuboids making up Phifer’s building, with contrasting dimensions and arrangement, possess the noble power and simplicity of classic geometry. Rationalists encouraged everyone to understand the city beyond pure functionalism. Phifer is also referencing various historical cities. The Central Square, planned between the Museum, the Rozmaitości Theatre, and the Palace of Culture and Science, resembles the Cathedral Square in Milan in its proportions.

The architect has drawn valuable conclusions from the extensive debate around Christian Kerez’s project and followed some of its concepts arising from the Local Area Development Plan: the Museum is clearly distinctive from the Palace, more horizontal than vertical, surrounded by arcades, and open to the area around it.

Phifer’s minimalist architecture may encourage others to create spatial qualities different from the commercial or the historical. The building will serve as a screen for new art interventions, screenings, or illuminations. The Museum will now be a backdrop for everyday urban life. Not an incongruous architectural icon, but harmonically fitting in with one of Warsaw’s major streets.

The new design uses architectural means of expression taken straight from the modernist canon, such as simple materials, ergonomics, and the mission of creating space for social life. The Museum of Modern Art in Warsaw has always aimed to be a part of the most important discussions concerning Warsaw and the society at large. With the new building, it will be even easier to carry out the mission of this public institution, which during the years has become an integral part of the Polish capital’s cultural offer.

The easily accessible ground floor of the Museum is designed in relation to the city, Plac Defilad (Parade Square), and the neighbouring park. Thomas Phifer has compared the glass walls of the ground floor to a white cloud drifting over the city; thanks to that the structure is light and seems to delicately float above the street. The Museum also has a “waist”: a long vertical crevice halfway up the building disrupts the monumental façade. The new building’s many windows invite the visitors to look at the city and have a little rest, providing conditions for individual contemplation while at the same time meeting the needs of the numerous audience.

The Museum will become a landmark on the popular walking route around the East Wall, the so-called Five Corners Square, and Złota Street. Getting around on foot and walking through the Museum will be made easier by a new pedestrian crossing planned at the intersection of Marszałkowska and Złota. The brightly illuminated interior, visible both from the street and the square, will attract visitors to see an exhibition or drop in at the auditorium.

The building’s scale matches the Domy Centrum department stores across the street, with façades hovering above the sidewalk; the Communist commercial complex was designed for foot traffic, with its famous Wiecha passageway.

The Museum and Warsaw modernism

It is not only a question of scale: Thomas Phifer’s building corresponds in its entirety with the legendary Wars, Sawa, and Junior department stores, its neighbours from the East Wall. The Museum does not aim to compete with them, opting instead to create an urban relation based on respect for the disappearing Warsaw modernism.
The museum fits in well with the horizontal nature of the southern part of the city centre. It will coexist in harmony with the numerous commercial outlets, as well as the nearby ministry district extending from the Three Crosses Square to Chałubińskiego Street.

The delicate, off-white, light-reflecting concrete of the Museum’s façades will uphold the traditions of the Warsaw centre’s architecture, evoking such (no longer existing) buildings as the pre-war Main Station, designed by Czesław Przybylski, with its minimalist, simple façades, or Bohdan Lachert’s so-called Dom pod Sedesami, based on geometry and abstract composition. The latter’s façade was also simple and rational, playing with rectangular windows and round openings.

The new building’s priority is creating a generally accessible public space. The Museum’s ground floor space will seek to create brand new urban quality, encouraging the public to get in touch with culture every day in a comfortable setting. This will be achieved by interconnecting with the surrounding green areas: trees lining the street and the Świętokrzyski Park, which will be made significantly bigger, extending towards the Museum.

The Museum offers a chance to revive Marszałkowska Street, which is currently experiencing the most difficult period in its history: the restaurants are closing, commerce is disappearing, the lights go out earlier in the evening. The Museum of Modern Art will create a new section of this historically vibrant street, making sure it lives well into the night.

The new Museum of Modern Art will provide a meeting point for urban life and art. The integration of various fields of art and its recipients will take place with a view of the city and the neighbouring venues around Plac Defilad. Only by promoting cooperation between all of them—the citizens, cultural institutions and commercial entities—can we hope for success and a permanent change of the capital’s central public space into a smart, user-friendly, and well-designed city.

Tomasz Fudala – art historian, curator of the Museum of Modern Art in Warsaw, co-curator of WARSAW UNDER CONSTRUCTION festival. 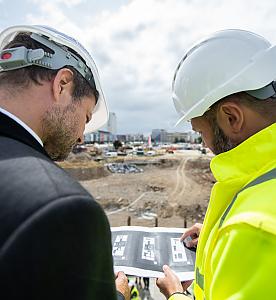 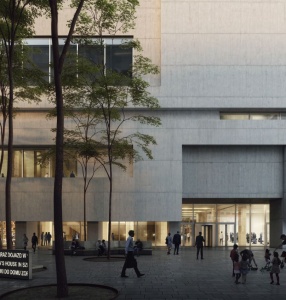 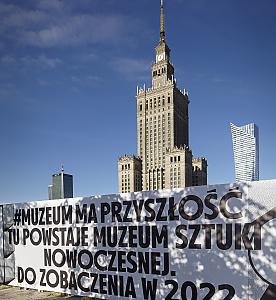