Graduate of the Faculty of Intermedia of the Academy of Fine Arts in Kraków, where he received his diploma in 2015 from the Performance Art Studio. Dobrucki is presently a Master’s student in the Faculty of Painting and New Media at the Academy of Art in Szczecin. His interests revolve around film, theatre, and the wild aspects of culture, as well as this culture’s motivations. Select activities and group shows include “KINO LAB / Intermedia.mov,” CCA Ujazdowski Castle, Warsaw; “THE DARK MATTER OF THE ART WORLD #1,” Klub Bomba, Kraków; INTERMÉDE FESTIVAL, Szpitalna 1, Kraków; and “Conversations with Plants,” Księgarnia / Wystawa, Kraków. The artist collaborated with MichałBorczuch on his spectacle “Paradiso,” ŁaźniaNowa Theatre, NowaHuta and the short theatrical form “MikroTeatr / Assholes”, Komuna Warszawa. 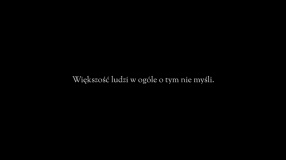