The goal of the “mission” is an artistic-research trip to the “Ekwador” disco club in Manieczki. “Ekwador” is an absolute icon of the club scene of the Polish peripheries of the 1990s. At a certain point, the legend of that venue turned the word “manieczki” into a nickname of different varieties of electronic music that were played there. The people behind the project embarked on a journey in a Volkswagen Golf, tuned specifically for that occasion, which was thus supposed to reflect the spirit of the glory days of “Ekwador.” The choice of the car model was not random as the third generation of Golf was a quite popular compact vehicle. It was frequently tuned owing to relatively low costs as well as the broad availability of car parts and extra accessories.

Both the venue and the car provide examples of the reception of Western trends by the Polish provinces at the time; an example of how they imported new music and technologies and interpreted them in their own way, thus creating a new local quality. As a phenomenon, car tuning was akin to remixing and sampling in music. Both in music and in motorisation, everything had to be supercharged, “pimped,” amplified, with all qualities tweaked.

The participants of the symbolic party pilgrimage from the centre (Warsaw) to the peripheries (Manieczki in Greater Poland Voivodeship) will explore the world of Polish people’s techno-nostalgia and its social-economic context as well as attempt to trace the remnants of the “golden age of Manieczki” in existing spaces, sounds and memories. 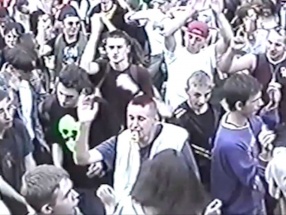