Since the late 90s techno music was discredited, degenerated and brutalized in the eyes of the society. It was marginalized, even though its live centers were mostly found outside major cities.

While in Germany the Love Parade was in the peak of its fame, techno never became openly mainstream in Poland. Nevertheless, attendance was very high at parties in clubs such as Ekwador Manieczki, Warsaw’s Lokomotywa and Instytut Energetyki, or at massive events such as Mayday in Katowice or White Season in Wrocław. It was a time when stronger genres of techno were born (trance, hardstyle, hardtechno, schranz, etc.), associated with aggressive urban youth, drugs and delinquency, which was an unfair stigma. The scene was condemned by parents, schools and the church. For many people “techniawka” (a derogatory term for techno) was provincial and vulgar, meant for the lower classes, the so-called “technomules”.

The video is a collection of fragments and snippets that switch like TV channels. Wide access to cable and satellite television contributed greatly to this phenomenon (the “Viva generation”).

Most of the content is found footage from low quality amateur videos (recorded using early digital cameras and mobile phones), as well as from some of the first TV programs on clubbing. The party goers shown in the video are dancing at Łódź’s Love Parade, on a Polish platform at the Love Parade in Berlin, at a Hardbass hooligan event in Łódź, as well as in various urban and rural clubs. For some techno was boiling with aggression and stupidity, for others it was a form of collective fun and self-expression. 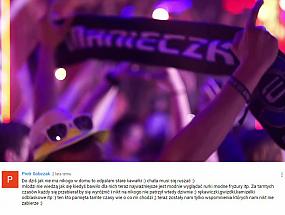