Museum of Modern Art in Warsaw presents a monumental monograph of the duo KwieKulik (Zofia Kulik and Przemysław Kwiek), whose activity came as a seminal phenomenon in the Polish art of the 20th century.

The book provides an extraordinary portrait of a tight mutual link between art and life as well as the artists' struggle with the realm of Poland under communism. It comes as a result of a nearly five-year elaboration of the archive of KwieKulik – the largest private archive gathering content related to avant-garde art and visual culture of the People's Republic of Poland. The book supplies unique source materials allowing the reader not only to understand the practice of KwieKulik – artists regarded as some of the most significant in the last half-century – but also to grasp its broad social-political context.

The main part of the publication comprises visual materials and texts documenting 203 events, which outline the avenue of KwieKuliks' practice since the late 1960s to the end of the 1980s. The book also embraces the artists' source texts and dictionaries – both of terms used by KwieKulik and the nomenclature of the epoch in question. Essays drawn up by contemporary authors mark an attempt at extending new interpretative perspectives for the artist's work.

KwieKulik is an artistic duo of Zofia Kulik (b. 1947 in Wrocław) and Przemysław Kwiek (b. 1945 in Warsaw), active between 1971-1987. The artists began as Oskar Hansen's students at Warsaw's Academy of Fine Arts. Since the beginning of the 1970, they imbued their art with a radically political character. Their engagement and uncompromising critique of the surrounding reality is unprecedented in the history of the post-war Central European avant-garde. KwieKulik by principle combined the artistic activity with daily life. In the 1970s they pioneered the process of transforming the domain of art into a laboratory of social participation and grassroots formation of groups able to achieve goals regardless of the state authorities' intentions. At the same time, they denounced conformism, lack of ideological load, cynism and hypocrisy – the main binders of community life in Poland under communism. They belonged to the first generation of Polish artists who at the turn of the 1960s and 1970s rejected the traditional means of expression and concentrated on performance, 'Activities' (term applied by the artists themselves) and the use of media in mechanical record and reproduction of images. They continue to provide a major point of reference for socially and politically engaged contemporary artists who tap in their practice into new media. 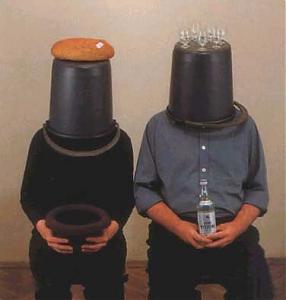