Archive of Kowalnia at the Museum of Modern Art in Warsaw includes photographic (nearly two and a half thousand of slides, negatives, digital scans) and film documentation of student works and actions in studio of Professor Grzegorz Kowalski, which he had been managing at the faculty of Sculpture at the Academy of Fine Arts in Warsaw since 1985.

Professor Grzegorz Kowalski was teaching students, who included such creative personalities as Jacek Adamas, Paweł Althamer, Katarzyna Górna, Katarzyna Kozyra, Jacek Malinowski, Jacek Markiewicz, Anna Molska, Anna Niesterowicz, Monika Zielińska, Artur Żmijewski and others. This studio, which produced graduates, who significantly influenced picture of Polish art of the last two decades, especially so-called critical art, was unique, because of an exceptional teaching method of Professor Kowalski, which he called as “partnership didactics”, which emphasized individuality of each student, allowing them gradually gaining independence from the professor’s authority, providing creative freedom and free selection of means of expression – hence, performance or video occurred in this sculpture studio.

The archive allows learning about early, student period of artistic works of each of them (many of these works have not remained or have been short-lived in nature), but also with group, collective actions, which took place in studio or in open air in Dłużewo. A place of particular importance includes Shared Area, Own Area, which is the author’s task carried out by Professor Kowalski together with his students since the beginning of the 80’s, based on process of nonverbal communication, which teaches interaction, reflex and group cooperation. Photographic and video documentation is completed with a few files of documents, maintained by Professor Grzegorz Kowalski. This documentation includes, among others, program of the studio in various years, texts of the Professor and his students, reviews, comments to tasks, copies of ephemeral magazine Czereja issued by Artur Żmijewski, exhibition catalogues and press cuttings. 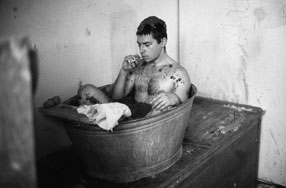