The Museum of Modern Art in Warsaw, together with the Karakter publishing house, is presenting a new book from the series entitled “museum talks”, devoted to British art of the 1990s.

When in the early ninety-eighties of the last century Gregor Muir came to London to become an artist, he knew one thing: art has no future. The city, like the rest of the country, was mired in economic stagnation. British artistic life was provincial and snobbish.

With a vengeance, a group of rebellious students of the Goldsmiths College entered into this world of boredom and lack of prospects, and it only took them a few years to turn it completely upside down. Damien Hirst, Sarah Lucas, Tracey Emin and their friends, art dealers and gallery owners would permanently transform the image of British art, and have quite a good time while doing it. Muir, who eventually became a critic and a curator, accompanied the group from the very beginning, the first exhibitions and the first lavish alcohol extravaganzas. His colourful and very personal story, enhanced with biting humour, is a testimony of a fascinating era and a portrait of extraordinary artistic personalities of its creators.

Gregor Muir is an art critic, curator, and the director of the London Institute of Contemporary Arts. Until 2011, he was the head of the London branch of Hauser &Wirth, one of the major contemporary art galleries in the world. Before Hauser &Wirth, he worked as a contemporary art curator at Tate Modern. He was involved in collective exhibitions of the YBA, such as “Lucky Kunst” and “Liar”. In 1997, he was one of the co-founders of the Lux Gallery in Hoxton Square in the London district of Shoreditch, which – previously neglected – became an important centre of artistic life in those times. As a critic, he collaborates with such periodicals as “Dazed & Confused”, “Parkett” and “Frieze”. He is also authored numerous essays included in such catalogues as the Cauldron (Henry Moore Institute), Gary Hume (Kunsthalle Bern/ICA, London) and General Release (British Council).

“museum talks” is a series prepared in collaboration between the Museum of Modern Art in Warsaw and the Karakter publishing house. We publish books on contemporary art and architecture – biographies, stories about significant and vivid phenomena, critiques. The audience of contemporary art is constantly growing; we would like to prove the fact that writing about art and artists can be exciting and become an inspiration to people who are not involved in art on a daily basis. The subsequent titles in the series will include: a biography of Alina Szapocznikow by Marek Beylin, a book about the hidden Warsaw modernism by Christian Kerez and Jan Strumiłło, including photographs by Nicolas Grospierre, and a story about the 1990s – this time, Polish Art of the nineteen nineties. 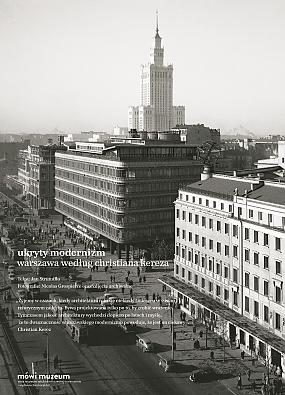