“It was them who felt bad…”
A text by Andrzej Leder, accompanying the "Into the Country" exhibition

This text accompanies the exhibition entitled “Into the Country” presented in Salt Ulus Ankara, prepared by the Museum of Modern Art in Warsaw to commemorate the 150th anniversary of the abolishment of serfdom in Poland.

Download PDF: Andrzej Leder - “It was them who felt bad…”

When young artists return to the countryside - from where they escaped to study at urban Academies – plenty of misunderstandings occur. These misunderstandings can be of a different character, appear in different situations, but there is something striking about them, as if two distant worlds clashed together. The worlds that lacked a moment of contact, a certain short circuit to link them.

For example, misunderstanding in the works of Michał Łagowski. Women from the Rural Housewives Club he is talking to do not understand questions about discrimination and gender inequality. When asked about these notions they smile in embarrassment. Conflicts are swept under the carpet, men are helpful. These women have nothing but compliments for their men, after all, they are so good to them… Women do not want to take part either in protest actions and demonstrations, or reclaim their rights. They talk about baking cakes, embroidering and learning practical skills. They complain about the lack of state (master) aid. The culture of combat is alien to them.

In fact, two opposing interpretations formulated by critical commentators become an accusation. One interpretation accuses the traditional, patriarchal rural culture. Michał Łagowski himself often speaks in this tone. Others, like Daniel Rycharski, accuse urban feminist movements and associated performers of not being able to reach out to rural women and speak in a language that would be understood by them. Obviously, there comes a question – a question ever present in all emancipating discourses: whose language is this language “of theirs”? Do not women themselves speak in the language of patriarchy? Michał Łagowski wants to expose and disturb this phenomenon through his “performativity of a backyard.” Entering the neighbourhood, the family and the community – that surround him everyday – with such words as “gender” or “Manifa”[an annual demonstration for women’s rights and gender equality that takes place in larger cities in Poland], he creates an extra sense, which tears the fabric of speech like a splinter. The speech, which according to the president - the male president - of the Rural Housewives Club, is there to hide difficult thoughts. "Thinking is allowed, but loud expression of these thoughts is forbidden" - says the male president with an awkward smile.

Ashamed by the look of a performer.

Ashamed. So maybe accusations are out of place here. Maybe we should think of a mental record of intertwining, centuries-old layers of customs, attitudes, fears, perceptions and ways of speaking... Maybe in every conversation such layers are animated to speak in a voice of ostensibly contemporary characters… Women from Łagowski’s film. They demonstrate themselves under the look of a man, a master-who-finished-schools, such is their fate; therefore, the artist is the one beside whom they want to mark their presence. Although he is our home boy, he has got a camera and makes a movie… This is his symbolic power. A watchful uncertainty could be heard in every sentence – will the words I express sound good to him? Will they find approval?

We tend to forget that for centuries the dominating form of rural life on gigantic areas of the old Republic of Poland was a farm. There, a peasant, a rural community, were subject to the master's authority. All cultural practices were shaped in a space defined by this hierarchical relationship: a peasant’s bond with the master. The one who stood above asked questions. The one who stood below answered these questions in a way that earned a compliment or – even more extreme – that sought to avoid condemnation and the worst feeling of all: embarrassment. For example – for a woman – that would be any mention that her husband is no good. So how could she say that there are any conflicts or falling outs with him. That would be a shame!

Despite the abolishment of serfdom in the XIX century and despite dramatic events of the XX century – world wars, social revolution – such a way of mutual perception has remained intact and this is why Michał Łagowski’s questions trigger embarrassment, in spite of a detectable will to express oneself. We exist in a somebody’s look… and this young, educated lad is asking questions and looking at us.

“Urbanity” allocated to the countryside-native artist exists not only in rural inhabitants’ minds. It shapes his thinking. Unconsciously internalized by him in the form of a culture of contemporary “higher classes”, culture absorbed during studies, bestows meaning onto each word and question he asks. He perceives rural women’s unwillingness to confront themselves with certain issues as embarrassing. Therefore, treating an interlocutor with utmost openness, he would like to persuade them to express some sharpness, courage or shaking off, while the embarrassed women are only smiling humbly… This creates a strange situation in which geometry of a look, shaped by centuries, works completely different from a partnership-oriented intention the performer brings along. It creates tension and drama.

His impatience confers a lordly trait onto him. It was a master who was allowed to be impatient, whereas a servant is characterized by patience. In Polish, “patience” means the ability to suffer. Michał Łagowski does not want to patiently bear the suffering, shame and condemnation any longer. He wants them to be visible. That is why he makes them a matter of his work, the thing he calls “a dense matter of shame.”

When looking at the contrast between the internalized rhythm of urbanity and the imaginary natural rhythm of the rural existence one could also see a source of a particular tension that overwhelms Krzysztof Maniak's work. Here, one cannot sense impatience, but rather uncertainty, a wish to separate oneself by means of entering a meadow, a forest or a bed of snow. The rural community, not to mention the city buzz, is far away. The entire conflict disappears, however misunderstanding emerges in the form of a loop, repetition, clatter of a machine, which brought into the rural landscape annoy as something incompatible… Incompatible with what?

Ultimately incompatible with our vision of a circular rhythm of nature, where each season is placed on a wheel of changes; spring coming after winter, then smoothly transforming into summer to fall down to the ground with the leaves. Maniak places each season on a different screen; like city quarters existing by one another, these visions are governed by different rhythms. Although he melts into a forest and a meadow, although his hand melts into the snow, the topography of this work of art derives from the internalization of a different form of life. This is a linear form, in which repetition has the qualities of an equation, while the multitude of rhythms appear as a parallel structure. This is a form created by and for urban capitalism.

Perhaps this is what makes the artists’ returns to a home village so difficult; a deep-entrenched separation of these two cultural codes that need to clash somewhere in their works. Through studying and getting acquainted with the world of European art, they simultaneously undergo acculturation. The community culture of shame disappears, their individual “me” is pervaded by guilt, reclamation, emancipation. Perhaps only Krzysztof Maniak mixes these two themes in his astounding record of his own separation. After all, there is some degree of shame in his work, but this feeling has already been separated, made individual, placed outside the community.

The dominating culture of Polish intelligentsia, civil officers, the military or even socialists, stemmed from manors. This culture never saw a rural community. In moments of historical turmoil - like during the great crisis of the 1930s, after the agricultural reform and the establishment of the Polish People’s Republic or during the epic of the Solidarity movement – the voice of this community was heard only for a short spell, left one or two documents, a testimony of a peasants’ strike or social advancement, only to melt itself in the giant stream of urban, and historically lordly aesthetics. The rural culture, not long ago the culture of an overwhelming majority, has never had its moment of banging its fist on the table, of declaring a "peasants' war" or turning its back on all the others. The "Galician Slaughter" of 1846 or peasants' strikes of 1937 were only wrinkles on the ocean of patience. Today, after 150 years, nobody wants to remember, both in the cities and in the countryside, that in 1864 serfdom was abolished by the Russian Tsar in an act targeting the landowning class. Contemporary Polish townspeople cultivate their visions of noble ancestors and their manors. In the countryside, these matters have long disappeared under the layer of routine “now.”

Only the youngest generation of the urban intelligentsia creates such projects as RUTA that bring back songs of enslaved peasants from the ocean-like period between the XVI and the XIX century. Songs of revenge; cruel, furious, screaming: “up with sticks to beat the masters!” By means of a punk formula, but mainly through sharp, categorical words and ascetic, black-and-white images in their video clips, they recall the fury the majority of the Poles would like to erase from memory.

This lack of a revolting gesture makes the rural culture so defenceless in encounters with the urban look.

Paradoxically though, the urban look has a deep internal fear of a revolt. Just like in Honorata Martin’s narratives, fear of aversion, rejection, disdain or a kick. What is striking in her story is a peculiar perspective: from people she meets on her way she receives a look that reflects her very self. Essentially, Honorata - as the representatives of the high culture usually do - fails to see the real people of the countryside; she only sees herself reflected in others' looks and these looks are dangerous, these looks turn her into a witch; “they all look with hostility and disgust.”
Her feeling of strangeness reflects the peasants' war that has never taken place in Poland.

The fear of men, rural sexuality: brutal and misogynic. In the community the body of one serves the body of another; a man by means of his hard, bestial work and his masculinity, a woman through her labour and sex, her “cunt”, as explicitly stated by Rycharski. The artists, coming from nowhere and passing by, fantasize about it. Only after the journey does Honorata Martin assert that she has met the beautiful people. And it was them who felt bad with her fear, with the fact that she made them look scary.

Patience and the feeling of belonging to the world he came from are inherent to Daniel Rycharski’s works. He even has that shame that failed to be covered by urban education. He can beautifully talk about it. But perhaps, his work is the greatest assault on the traditional rural world.

When one resident of a village in Podlasie went to the Warsaw Zoo and saw a rhinoceros, he calmly stated: "such animals do not exist." This declaration was not an expression of a specialist, critical scrutiny, it expressed the dissent triggered by the disturbance of the ontological order that allocates space for hens, cows and even wolves, but not rhinoceroses. Oddity of such creatures is only possible where a hybrid amalgamate of incongruent rules takes the reign – the one brought by urban artists. Daniel Rycharski’s murals bring on the invasion of impossible animals that by means of their smoothly outlined shadows smash the everyday aesthetic order of the countryside. An ostrich with a peacock’s tail, a horse with a prehistoric reptile’s head… In abandoned farmyards, on crumbling walls of old cow-sheds the afterimages of something unseen by a human eye are flashing...

What’s the point? For whom?

For the sake of beauty?

Publication connected with the exhibition 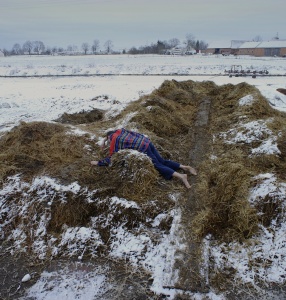 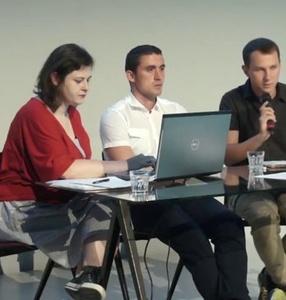 Gender and the Countryside 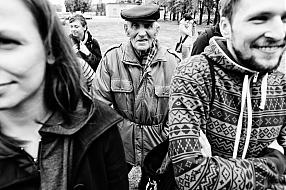