The archive of Prof. Grzegorz Kowalski’s studio—kept since 1985 and known by students as the Kowalnia (‘Smithy’)—documents work by students, including such creative individuals as Jacek Adamas, Paweł Althamer, Katarzyna Górna, Katarzyna Kozyra, Jacek Markiewicz, Anna Niesterowicz, and Artur Żmijewski. The studio—whose graduates have had a major influence on Polish art (particularly so-called “critical art”) over the last two decades—is unique thanks to Kowalski’s teaching method, which he calls “partnership didactics”. It emphasises each student’s individuality, allowing them to become gradually independent of the professor’s authority, and providing creative freedom in their choice of means of expression, which explains how performances and video emerged from a sculpture studio.

The Kowalnia archive allows us to acquaint ourselves with early, student pieces by the studio’s artists. Many of them have now been lost, or were only ephemeral individual or group works. A place of honour in the archive goes to the “Common Space, Individual Space” project, which is already legendary in art circles, and has been implemented by Kowalski and his students since the early 1980s. Based on a process of non-verbal communication, it taught interaction, reflexes, and team work.

The photographic (almost 2500 slides, negatives, and digital scans) and video documentation is complemented by studio curricula from various years, texts by the professor and students, reviews, commentaries on projects, copies of the “Czereja” magazine published by Artur Żmijewski, exhibition catalogues, and press cuttings 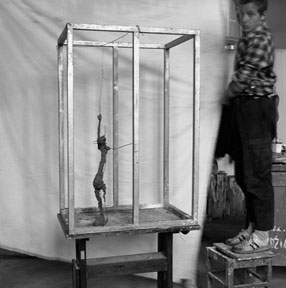