Yona Friedman’s installation is a perfect illustration of his key ideas and currently the most important of his later works. The artist was born in 1923 in Budapest and began his career as an architect, urban planner, artist and theorist in the 1950s in France. He is the author and main theoretician of mobile, temporary and ephemeral architecture. His works are influenced by the humanism of architectural thought which has its roots in his personal history of an emigrant and refugee who experienced homelessness and the need to build temporary shelters. Since the late 1950s, Yona Friedman had been in contact with another artist important in the Museum’s collection, Oskar Hansen.

Friedman’s interests evolved into a theory of the open city, manifested by the idea of a “city bridge” (1968). Nowadays, these partially utopian visions have become valid again and Friedman’s works are center to discussion about the development, or rather the humanization of the contemporary postmodern city. Apart from carrying out architectural projects, Friedman also creates artistic works portraying his idea. One of such artworks, an installation, was presented at the Biennale in Vienna in 2009. It was exhibited at the Arsenal where it was confronted with contemporary critical works. Including Friedman’s installation Iconostase (Protenic Structure – Space Chain) in the collection of the Museum of Modern Art in Warsaw is a significant introduction to classic city criticism and enables a contemporary revision of a locally important, modernistic utopia. 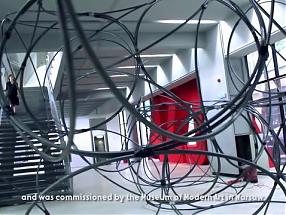