1996 saw Toporowicz’s show at New York’s gallery Lombard-Freid – Lure. Behind the mask of phantasmagoric logic of late-capitalist processes of production and promotion of goods, the artist tackled their racist dimension.

At the gallery, Toporowicz presented his self-made fragrance: Lure, which (as he intended) was a mixed scent of young Thai prostitutes and Buddhist temples – the essence (materialisation) of the Europeans’ and Americans’ kitschy fantasies about exoticism of the East.

The artist covered the gallery walls with posters of his own design, forming part of the ad campaign of the new product, with the Lure logo and photos of smiling Thai prostitutes and abandoned HIV-positive kids, taken by Toporowicz in Bangkok. The display was accompanied by a video assembled of fragments of feature films set during the war in Vietnam. 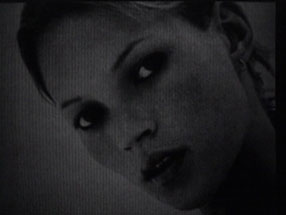