Activity in an exhibition space, where the distinction between real objects and painting representations becomes blurred in a way that is characteristic of Mioduszewski’s work. The artist situated himself in the confines of a wooden installation. Not only did he immobilise himself among wooden elements, but also became covered with a thin quasi-wooden layer that deprived him of human appearance. The play on the contrast between dead matter and a living person allowed Mioduszewski to draw the viewers into his performance. 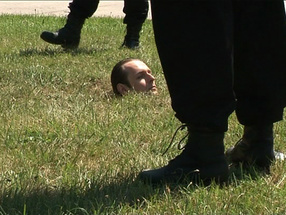