All about the Collection
"Flicking" by Miron Białoszewski

“Flicking” was begun in the end of the 1960s in the Żoliborz studio of artists Roman and Ada Klewin.

It was a slapstick-style continuation of the theatrical interests of the poet and his group of close friends. The short, improvised films were inspired by simple day-to-day situations, but Miron Białoszewski’s scripts were often based on dreams too. The poet considered dreams to be works on a par with literature or film. While “Flicking”, Białoszewski was not only the director of situations on the borderline between reality and theatre, but also the initiator of friendly pranks. 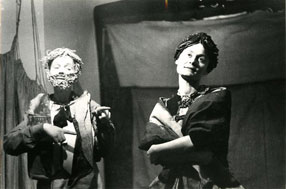