He is the Global Distinguished Professor of Russian and Slavic Studies at New York University, New York. In addition Groys is Professor for Philosophy and Media Theory at the Academy for Design (Hochschule für Gestaltung) in Karlsruhe since 1994. Together with Peter Weibel he organized Medium Religion, ZKM, Karlsruhe, 2008–2009 on the medial aspect of religion. Groys’s work was recently shown in the exhibition Thinking in Loop: Three Videos on Iconoclasm, Ritual and Immortality, apexart, New York, 2008. 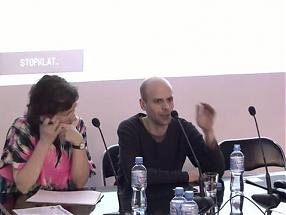