Helmut Jahn – born in Germany and associated with the United States – is one of the most important contemporary architects, whose achievements include over a hundred prestigious projects.

Designed as a retrospective of his work, the exhibition "Architecture + Urban Space", organized at SARP Warsaw in September 2013, takes us on a journey around his most famous projects in the United States (e.g. the Chicago James R. Thomson Centre, a New York skyscraper), in Europe (e.g. the Berlin Sony Centre, the Frankfurt Trade Fair Tower, the Munich airport), in the Middle East (e.g. the Doha Convention Centre Tower), as well as Central and East Asia (e.g. the Bangkok airport, the Shanghai International Financial Centre). 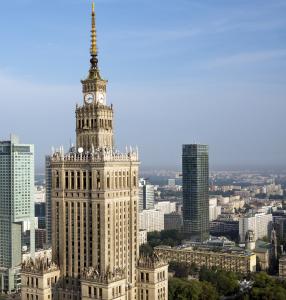