Andrzej Wróblewski - FROM WITHIN / FROM WITHOUT
Lecture by Serge Guilbaut

Serge Guilbaut - professor of Art History at the University of British Columbia in Vancouver (Canada). He has written on modern and contemporary art and, in particular, on cultural and political relations between the United States and France. He has published, How New York Stole the Idea of Modern Art: Abstract Expressionism, Freedom and the Cold War (University of Chicago Press, 1983; translated into 5 languages and published in French in 1990 by Éditions Jacqueline Chambon) and Voir, Ne pas Voir, Faut Voir: Essais sur la perception et la non-perception des oeuvres (Nîmes: Jacqueline Chambon, 1994). He has also edited several other works: Modernism and Modernity (Halifax, N.S.: Press of the Nova Scotia College of Art and Design, 1983, 2006), Reconstructing Modernism: Art in New York, Paris, and Montreal, 1945–1964 (Cambridge, MA: MIT Press, 1990), and Edited with John O’Brian and Bruce Barber: Voices of Fire: Art Rage, Power, and the State (on Barnett Newman); Toronto: University of Toronto Press, 1996). He has Co-edited with Laurent Gervereau, Laurence Bertrand Dorleac and Gérard Monnier, Où va l’histoire de l’art contemporain?, Paris, 1996. He has extensively published in an international press and organized several exhibitions: “Théodore Géricault: The Alien Body, Tradition in Chaos” (1997), “Up Against the Wall Mother Poster (on posters from 1968)” in 1999, and “Be-Bomb: The Transatlantic War of Images and All That Jazz, 1946–1956” at MACBA in Barcelona in 2007 (critics’ prize of the Association of Catalan Art Critics for the best exhibition of the year). As an artist, he has participated in several exhibitions like “Drawings”, “Vancouver”, 1996 and Artropolis, “Browser” 1997. He also had his own art retrospective in 2012 in Vancouver called “Retro-Perspective” (art and performances from 1965 to 2012). 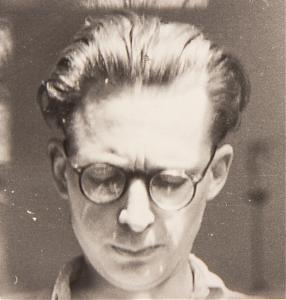 Andrzej Wróblewski - FROM WITHIN / FROM WITHOUT