„I’m just providing the possibility, the condition for things to happen” - Ryan Gander

Ryan Gander's work Really Shiny Things That Don’t Mean Anything is a 3-metre metal sphere covered with a thousand shiny, metal items. The sphere gives the impression that it has just rolled through the city and collected small objects on its surface, the function or form of which is unclear. Frozen on a plinth in the middle of the city, the sphere gleams in the sun and resonates light onto the surrounding area, prompting the curiosity of local inhabitants and drawing intrigued glances as if by magnetic power. The artist declares that the work "does not mean anything", since meaning can not be imposed, it can only be produced through a long process of negotiation, similar to how social space is produced, as explained to us by the French philosopher Henri Lefebvre. 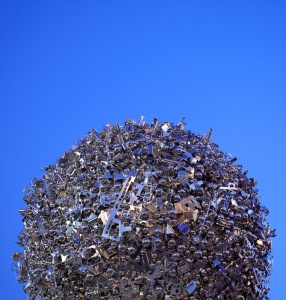