Panoramic Sea Happening:
It was 50 years ago!

Perhaps the best-known photo in the history of Polish art was made on 23 August 1967 on the beach at Łazy, on the Baltic coast near the village of Osieki.

In the frame we see the back of Edward Krasiński, dressed in a tailcoat, conducting the waves. The concert is witnessed by a group of sunbathers reclining in beach chairs, gazing at the conductor and the sea horizon. On the far left we see a small rowboat. The shutter was released by Eustachy Kossakowski, and the entirety was dreamed up and directed by Tadeusz Kantor, who spent that day running along the beach in a fedora and striped bathrobe, clutching a megaphone.

The iconic photo is a record of the "Sea Concert", one of four performances organized that day by Kantor on the Baltic beach warmed by the late summer sun. The picture lives on, documenting artistic life at the peak of the era known in Poland as Gomułka’s “little stabilization,” and as an online curiosity stirring the imagination of internet users from the farthest corners of the earth.

The title "Panoramic Sea Happening" referred collectively to the set of four performances, although it is typically associated only with Krasiński directing the waves.
There are many other pictures surviving from that crazy day on the Baltic beach, full of art people gathered for the International Encounter of Artists, Teachers and Theoreticians in Osieki (an event also known as the “Osieki plein-air” or “Koszalin plein-air” convention, organized by the artistic community of Koszalin and held for nearly 20 years, from 1963 to 1981), as well as random holidaymakers.

The canonical documentation of the happening, executed by photographer and photo reporter Eustachy Kossakowski, who was affiliated with Galeria Foksal, is housed together with his entire archive in the collections of the Museum of Modern Art in Warsaw. The history of the "Panoramic Sea Happening" can thus be traced following the photographic thread. The complete archive is accessible at the museum’s website. Experiencing the black-and-white photos in sequence, viewers will soon sense that they are there on the beach, among those free, joyous and scantily clad folk. It is the frankly sensuous freedom emanating from Kossakowski’s photographs that is the source of their undying popularity, and it is thanks to them that Kantor’s action remains eternally alive. Apart from the "Sea Concert", the day also included "The Erotic Barbouillage", in which Anka Ptaszkowska, Maria Stangret and a dozen co-eds from the Polish Students’ Association camp in Łazy wallowed in a mixture of sand and tomato paste. In "Agrarian Culture on the Sand", bathers were issued with rolled-up newspapers which they were to plant in the beach as instructed. In "The Raft of the Medusa", the participants broke out into smaller groups tasked with reconstructing the famous painting of that name by Théodore Géricault, based on numerous prints of the picture handed out to them. Meanwhile, other members of the Galeria Foksal group present on the beach - Wiesław Borowski, Zbigniew Gostomski and Mariusz Tchorek - carried out "The Sinking": a huge chest with the inscription “Galeria Foksal,” allegedly containing documentation of the gallery’s activities, was cast into the sea.

That legendary day on the beach in Łazy generated countless footnotes in the annals of art history. Kantor’s performance was accompanied by initiatives of other artists. The context of the Osieki plein-air event was significant in itself. The 1967 edition is remembered down to the present day, along with Kossakowski’s photo, as one of the most important events of post-war Polish art and the world history of performance art.

To mark the 50th anniversary of the event, apart from links to the complete set of photos from the "Panoramic Sea Happening" available at the museum’s online archive, we also present scans of the documentary flyer about the performance issued immediately afterwards. Apart from the photo negatives, it is the only tangible souvenir of the event that occurred exactly half a century ago. 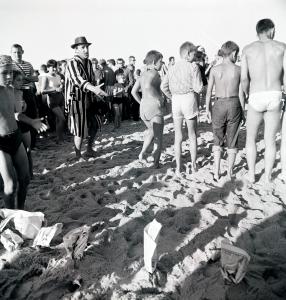