This February sees a metamorphosis of the Museum of Modern Art in Warsaw, which reveals its new face as a cinema for all enthusiasts of ambitious films of high aesthetic and intellectual value.

The programme of Kinomuzeum features the phenomena with modest representation in the mainstream cinematography alongside screenings of feature films premiered at top film festivals worldwide. Kinomuzeum inaugurates with the premiere of Steve McQueen’s Shame from the latest International Film Festival in Venice.

Artist Moving Image is a presentation of Polish premieres of films by such artists as Anri Sala, Chapman brothers, Jeremy Deller or Damián Ortega. Collection reviews works by the artists embraced within the collection of the Museum of Modern Art – Laurel Nakadate, Jonathan Horowitz, Duncan Campbell.

Collateral to the screenings, the entire month sees lectures and meetings with filmmakers and artists, as well as special presentations within the series ReForm, aimed at launching a debate on the formal aspect of the Polish cinema.

Friday, 2 March 2012 marks the official inauguration of Filmoteka of the Museum of Modern Art in Warsaw – archive of Polish experimental films and video art (ca. 600 titles), publically available on the Internet. On this occasion, artist Józef Robakowski and Łukasz Ronduda, curator at the Museum, will discuss the most fascinating phenomena in the Polish artistic cinema from the 1920s until the present day.

The launch of Kinomuzeum and Filmoteka comes as a continuation of the activities of the Museum of Modern Art in Warsaw related to the Film Award of the Polish Film Institute and the Museum, awarded yearly to a visual artist for the production of a feature film.

All the above mentioned initiatives from the Museum’s film programme are aimed at stimulating the dialogue between cinema and art, between the filmmakers’ and visual artists’ circles.

To celebrate the inauguration of Kinomuzeum, the entrance hall of the Museum welcomes the neon sign of the legendary cinema Skarpa in Warsaw, torn down in 2008 to make room for a luxury apartment building. The cinema Skarpa, opened in 1960, showed the most important Polish and foreign film premieres (Andrzej Wajda’s Man of Marble, among others).

The cinema and the neon sign, which currently belongs to the Museum’s collection, was designed by Zygmunt Stępiński, outstanding architect and co-author of Warsaw post-war reconstruction designs, the W-Z Route and Nowy Świat, among others. 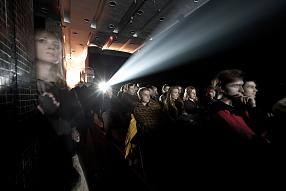