The work has been made in close circuit technology (screening of a image filmed in real time by a camera – it allows for instance the making of replicas of frames without the necessity of recording the whole film material) which was invented for the first time by Film Form Workshop in Łodz in mid-1980s.

The work shows bared woman's loins. Her pubic hair has been weaved into a pigtail. It is recalling the work “Ewa”, where also an arranged, seemingly banal scene turned out to be a pretext to speak about the questions of subjectivity of human body, where sexuality can be treated as one side of economic transaction. 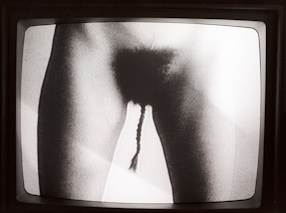