Zbigniew Libera poses to the photos assuming a pose similar to a dead cat, next to which he lied on the pavement. In this work again the artist's body is an important part of the concept and mean of expression at once. Human body juxtaposed with a dead animal lying next to it gains another meaning – the context weakens again the mythologised, humble approach to death and shakes up the stable relation between man and animal. One could consider this work as a first attempt in posthumanism area – anthropocentrism is shaken, human and non-human animal exist here in the same right. 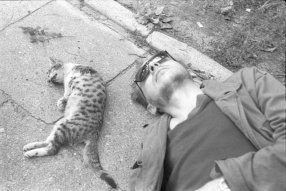