Bread and Puppet, which was founded in 1963 by Peter Schuman, is a puppet-theater propagating social and political leftist ideas. Its founders opposed war, racism, and any forms of violence. They protested against the war in Vietnam. In their spectacles they not only used simple methods of expression, allegory and clear symbols, but most of all, included a very clear political and ethical message. They placed emphasis on community action. Their shows often took place on the streets. In these ludic spectacles actors used giant puppets and masks made from the cheapest fabrics in accordance with the theater's philosophy of Cheap Art. Schuman said, "Our spirit is hungry. Jesus said that people can’t live solely on bread; they also need a puppet-show."

The Cry of the People for Meat, a spectacle based on the Old and New Testament, was shown in Wrocław. During one of the scenes, which represented the Last Supper, the actors and viewers shared bread among themselves; an action that was the theater's important custom (and also a source of the its's name).

In 1970 a photo reportage from the festival and Peter Schuman's text appeared in the French edition of the Polska magazine. (Peter Schuman, Le Theatre Estudiantin - Voix du Progres, „La Pologne”, 1/1970) 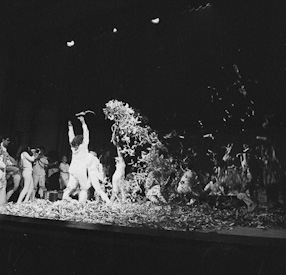 Bread&Puppet Theatre at the Festival of Open Theatre in Wroclaw, 1969